Red Beach joy turned to horror in the final of the North Island surf boat championships in Waihi Beach today.

Both the open women's and open men's finals came down to the wire, with Red Beach appearing to snatch victory over Piha's national champion men's crew in the last race of the day.

However, Piha were elevated to victory when officials ruled Red Beach hadn't held course coming home and passed through the wrong gate buoys.

It enabled Piha's crew of Paul Gerritsen, Scott Lissington, Benjamin Richards and Ben Scott, swept by Mark Bourneville, to grab the national series title, with the Waihi event doubling as the last round with more than 60 crews competing in tricky 1m swells.  Orewa finished second in the men's final, followed home by North Beach, who made the long pilgrimage up from Christchurch.

It capped a great day for North Beach, after their women's crew of Lucy Brown, Ella Farrell, Chloe Harris, Sara Morris and sweep David Pipe edged Muriwai in a thriller.

It came down to a video replay, with the final margin a matter of inches.  Bethells Beach capped a strong series, finishing third, while series leaders Piha could only finish fourth.

There was some consolation for Red Beach supporters, with crews winning the under-19 women's and masters men's finals, while Piha also picked up a win in the under-23 men's final.

Hosts Waihi Beach, with Tommy Gwilyn, Matthew Hart, Tate Va Duyvenbooden, Josh Marston and Jack Kingsford, won the under-19 men's final from the youngest crew on the beach, the fast-rising Sunset Beach boats, while Muriwai's under-23 women held off Piha and Bethells to win their final. 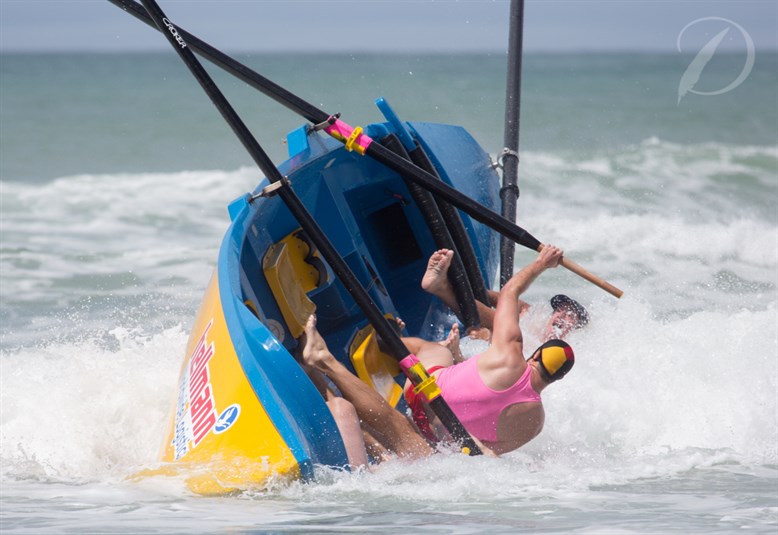