Competitors got a grand tour of Mount Maunganui on a frustrating second day of the Oceans 14 New Zealand under-14 surf lifesaving championships today.

The tube rescue heats and finals were transferred to the still waters of nearby Pilot Bay, with the only finals of the day decided.

Hosts Mount Maunganui took advantage of their swimming depth, collecting two wins and two minor placings to vault into the lead in the overall standings.

The other Mount win went to Isabella Akroyd and Lily Alton in the under-12 girls, heading home clubmates McKeelie Van Lye and Charlotte Wyatt and Mairangi Bay's Tayla Dalton and Caprice Thomas.

Whangamata's Conor Bradding and Oscar Williams won the under-14 boys, with Papamoa's Mitch Cowdrey picking up his second silver of the carnival, with Liam Moffart.

The beach sprint arena in the middle of Main Beach was well utilised, with Sunday's finalists selected, while the under-14 boys got through all their board race heats amid big surf in the middle of the beach.

The other location used was the relatively sheltered corner of Shark Alley, on the eastern side of Moturiki Island, where all under-11 and under-12 boys and giros and under-14 girls got through their board heats. 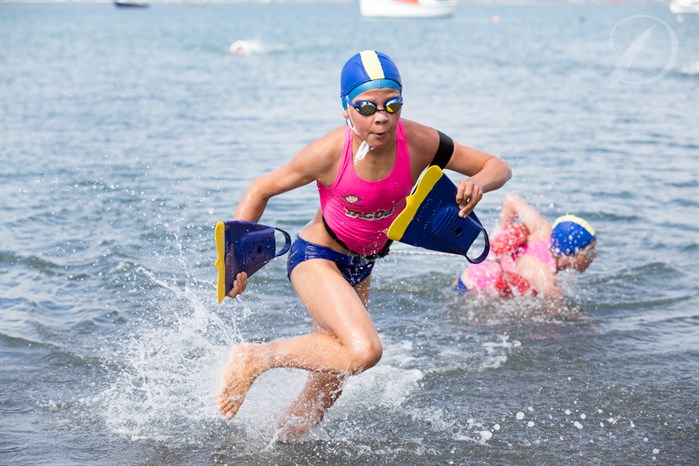