It has been another massive day at West Wave Aquatic Centre for the 2014 New Zealand Pool Championship with competitors breaking even more pool championship records.

Yesterday, the annual event was opened in style with a total of 22 New Zealand Pool Championship records broken. And today didn't disappoint.

Black Fin and Titahi Bay SLSC member Steven Kent followed up yesterday's winning performance (where he broke two records) to set another two. He won the 200m Open Men's Swim with Obstacles in a time of 1.55.16 as well as the 100m Open Men's Rescue Medley in a time of 1.01.06.

Black Fins team captain Andrew McMillan edged out Steven Kent in the 50m Men's Manikin Carry Without Fins to set a new New Zealand record with a time of 29.34.

But the records didn't end there. New Zealand Youth Team member Jacob Hales (Papamoa) set a new record in the Under 19 Men's Rescue Medley with a time of 1.10.40.

In the New Zealand Women's Line Throw, team mates Danielle McKenzie (Mairangi Bay) and Laura Quilter (Wainui) were an incredibly close .38 of a second off the World Record in a time of 10.78 seconds.

The 2014 New Zealand Pool Championships doubles as a send-off for New Zealand's surf lifesaving teams who depart for France on September 8 and at lunchtime today, members of the New Zealand Team were presented with a framed blazer pocket and the NZ Youth Team was presented with their team polo shirts.

During the weekend, the athletes are racing individually for their own clubs as well as teaming up for some national teams' races in the relay events to assist with their preparations for Rescue 2014.

On the club front, 2013 champions Papamoa SLSC are still sitting in the lead after Day Two with 698 points; 89 clear of Mount Maunganui's 609 points. Mairangi Bay is sitting in third place on 405 points.

Surf Life Saving New Zealand Sport Manager Mike Lord says it was another exciting day of fast, exhilarating racing with all of the competitors putting in outstanding efforts. "I'm looking forward to the final day of racing tomorrow," he says.

The action commences at 8.15am at West Wave Aquatic Centre in West Auckland.

Check out the photos from Day Two here on our Facebook page. 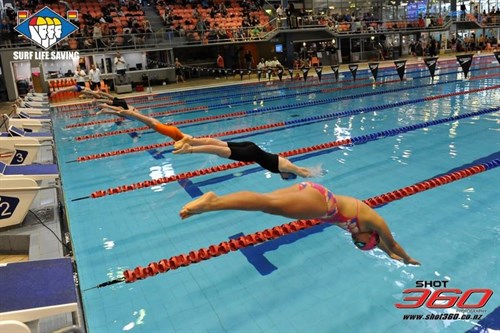