Paul Cracroft-Wilson and Nick Malcolm provided the highlights for the New Zealand surf lifesaving team in the second test of the International Surf Rescue Challenge in Japan today.

Beset by injuries and illness and in the face of a relentless Australian tide, the Kiwis looked to one of their veterans to keep them in the hunt.

Former world beach flags champion Cracroft-Wilson, 32, has spent much of this year recovering from knee surgery but still found enough to head off Australian Jake Lynch in the early rounds of the flags on Onjuku Beach.

He then dived underneath Japan's Shinya Odagiri in the final and somehow came up with the flag.

"We needed something to give us a lift and I was stoked to do my bit for the team today," Cracroft-Wilson, who also finished second in the men's beach sprint, said. "We've got some young athletes getting their first taste at this level and this will be a fantastic learning curve for them, knowing what sort of level they have to race at."

But Malcolm overcame a side strain in spectacular style, winning the men's board race and heading off world ironman champion Shannon Eckstein and Kendrick Louis in the process.

The injuries placed more pressure on some of the younger team members, and Papamoa's Natalie Peat responded magnificently in finishing second to Kristyl Smith in the ironwoman and second to Miranda Bell in the surf race.

Once again, however, Australia's big guns kept them out in front.  After winning Thursday's first test by 17 points, Australia leaned on Eckstein, Smith and Olympic paddlers Naomi FLood and Lachlan Tame to lead their efforts.

Chanel Hickman had to bow to her great Australian rival Melissa Howard in the beach flags and sprint, finishing second each time, while Olympic champion kayaker Lisa Carrington again finished behind Flood in the ski race.

The third and final test is tomorrow, with Japan, Canada, Hong Kong and Korea also competing. 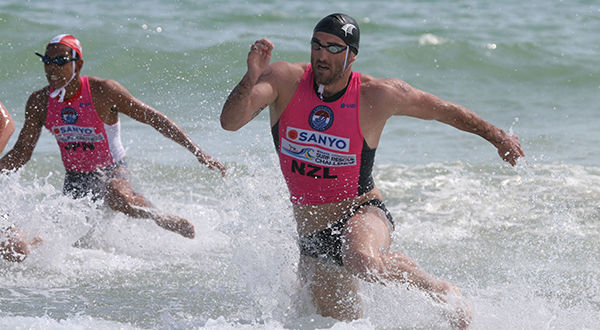 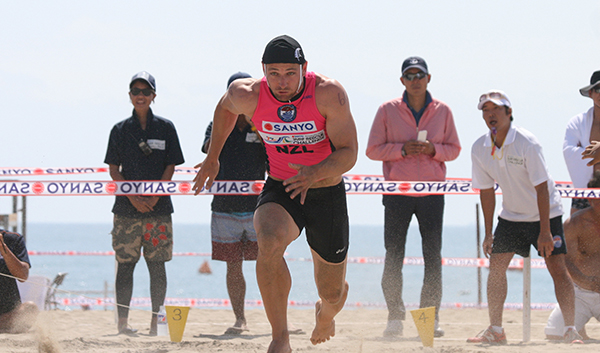 New Zealand's Paul Cracroft-Wilson (Fitzroy) on his way to victory in the beach flags at the International Surf Rescue Challenge at Onjuku Beach, Chiba Prefecture, in Japan. Photo by Mark Weatherall