Ironwoman Devon Halligan added some sparkle to a tough day for the New Zealand surf lifesaving team at the International Surf Rescue Challenge in Japan today.

In the face of a fired-up Australian team, Halligan helped New Zealand to clear second in the first test on Onjuku Beach, picking up wins in the board race, board rescue and tube rescue and finishing second in her specialist ironwoman to Australian veteran Kristyl Smith.  Australia finished on 157 points, 17 ahead of New Zealand, with hosts Japan trailing in third on 100 points.

It comes less than a week after Halligan, the daughter of former Kiwis rugby league player Daryl, qualified for the lucrative Kellogg's Nutrigrain series in Australia and she admitted that result helped her performance in the Japanese waves.

"Qualifying for the Kellogg's series was a big weight off my mind and it allowed me to go out and really enjoy it today," Halligan explained.  "I would've liked to have got closer to Kristyl  in the ironwoman but she's a very tough competitor.  All the Aussies are pretty fired up so any win we get off them this week is pretty satisfying."

Australia were stung by New Zealand's win at the world championships in Adelaide last year and vowed revenge at this carnival, which is held in alternate years to the biannual world champs.

Flood edged out New Zealand Olympic champion Lisa Carrington in the women's ski race, with Halligan third, while Tame and Eckstein finished first and second in the men's event, ahead of top Kiwi male Liam O'Loughlin.

"The goal was for Shannon and I being the first two events to kick us off in the right direction," said Smith. "We came here with a point to prove. We're number two at the moment and we want to get back on top."

Carrington and O'Loughlin also finished second in the mixed ski relay, although the world champion kayaker was relishing her first taste of New Zealand surf lifesaving representation, after beginning her sporting career on the beach.

"I'm really enjoying the opportunity and it's always a proud moment to represent your country," Carrington said.  "I've raced Naomi a lot in kayaking and she's an amazing competitor but she's even tougher once you put her on a ski."

Rookie Natalie Peat performed well in her first taste of open competition at this level, finishing third behind Smith and Halligan in the ironwoman and third in the surf race.

To keep up to date with the team's journey visit the High Performance Facebook page at  www.facebook.com/slsnzhp or on Twitter  @slsnzhp or on the ISRC web page  www.surflifesaving.org.nz/isrc. 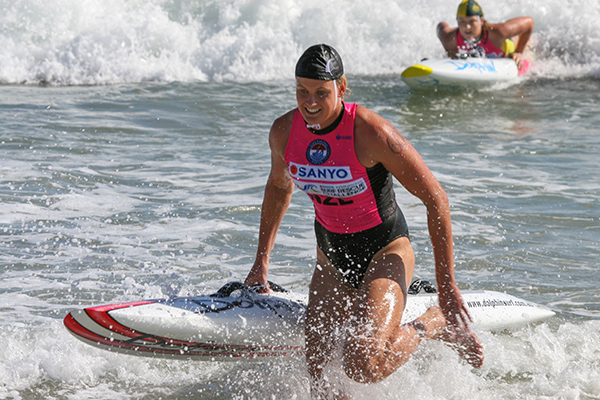 New Zealand's Devon Halligan on her way to victory in the women's board race at the International Surf Rescue Challenge at Onjuku Beach, Chiba Prefecture, in Japan. Photo by Mark Weatherall