Bryce Chisholm has always wanted to swim the Cook Strait and two months ago when he decided to turn his dream into reality, he also decided that he would do it for a cause close to his heart.

The Green Bay (Auckland) resident is a born and bred Muriwai clubbie. His grandfather was one of the club's founding members. Although Bryce "retired" a few years back, it's something that is always part of your life, he says.  "Surf lifesaving was such a major part of my life for so many years, so fundraising for Surf through this life goal of mine seems like a natural fit," he says.

Bryce says he has always wanted to swim the Cook Strait and him and his mum Irene had often discussed the idea of doing it. But sadly, she passed away three years ago.

Before he swims the 29 kilometres separating the North and South Islands, Bryce plans to swim 42 kilometres across Lake Taupo. This first challenge is scheduled for February 2015.

Then, in 2016, he hopes to complete a double crossing of the Cook Strait, a distance of 58 kilometres. To date, only 83 successful single crossings have been made by 73 individuals from nine countries. The longest took around 19 hours while the shortest time was four hours and 37 minutes by Kiwi Casey Glover in 2008.

Only two people have ever completed a successful double crossing and the most recent time was in 1988 by event organizer and member of Lyall Bay Surf Life Saving Club Philip Rush. He swam from North to South and return in 1984 at age 20 in a total of 16 hours and 16 minutes. Then in 1988 he swam from South to North and return in 18 hours and 37 minutes.

The other swimmer was Meda McKenzie who swam from North to South in 23 hours and six minutes in 1984 when she was 21 years-old.

Bryce says he has no doubt that he will complete it. He hopes to spread the word about the great work of Surf Life Saving as he builds up to the challenges.

He is currently swimming six mornings a week. "I swim around eight kilometres on Monday to Friday and on Sundays I swim around the 15 kilometre mark but soon I'll move that to 20 kilometres," he says.

Bryce will also take part in the State New Zealand Ocean Swim Series (SNZOSS) to which Surf Life Saving New Zealand is proud to be the official charity partner of.

The SNZOSS is a unique six-event ocean swim series at some of New Zealand's most iconic and beautiful locations. The first event in the series, the Harbour Crossing, takes place in Auckland on November 17.

Bryce says he hopes to use the series as part of his training, as a way to get back in touch with some of the Surf Life Saving members that he used to compete with and also as a way to spread the word of his fundraising efforts for Surf Life Saving. 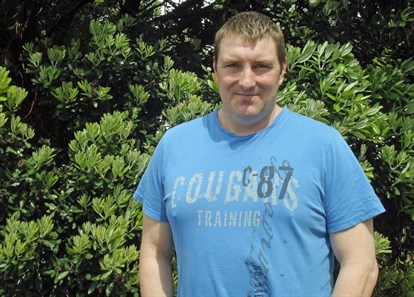