The Blues Awards, presented in partnership with Victoria University of Wellington Students' Association, are the highest sporting accolade that can be attained at University level.

Sam has a long list of surf lifesaving and swimming achievements to her name. She was a member of the Black Fins team who won the title of lifesaving world champs at Rescue 2012 and next month, she will represent New Zealand at the 2013 International German Cup.

One of her fellow Black Fins and German Cup team mates Laura Quilter (Wainui) was awarded Sportswoman of the Year at Massey University's Albany Blues Awards.

But it doesn't stop there. Sam is also a finalist in the youth category in the upcoming 2013 Wellingtonian of the Year awards.

She is a finalist alongside Mark Berry (co-host of the TVNZ programme Attitude) Sebastian Hallum Clarke (innovator and app developer) and Taylor Finderup (Shark Angel).

Winners will be announced next month. 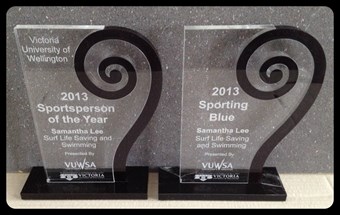