Hamish Treanor, 18, and 20-year-old Mount Maunganui Lifeguard Service clubmate Sam Shergold conquered the 'Gold' in Queensland over the weekend, racing along one of Australia's most famous stretches of beach, from Coolangatta to Surfers Paradise and back.

Treanor finished 17th in the under-19 division over 33km and New Zealand under-20 team member Shergold clocked 4hrs 28mins 17secs for the full 43km open race, finishing 25th against some of the best ironmen on the planet.

They've arrived home just as their club launches the inaugural Mount Monster, a 25km multisport dash in December along one of New Zealand's own famous pieces of coastline.

"I've dreamed about doing the Coolangatta Gold for years and it was everything I expected," Shergold said.  "But getting the chance to race a similar event along my home beach will be even more special and I can't wait to test my endurance base on familiar sand."

The Mount Monster, presented by Steve Bird Winery & Vineyards, will feature $7000 in prizemoney.  It involves a 5km beach run, a 6km board paddle around Motuotau Island and a 12km ski paddle, ending with a run out to the blowhole on Moturiki Island and a swim back to the Main Beach.

The bare bones of the course have featured in some of Mount coach John Bryant's renowned training sessions but this will be the first time the race has been opened up to all-comers.  Athletes from around New Zealand and across the Tasman have already expressed interest.

While it won't have the immediate familiarity of the Coolangatta event, MMLS general manager Glenn Bradley expects it to have a similar appeal.

"We're incredibly lucky to have such a magnificent playground right on our doorstep," Bradley said.  "This race not only aims to test athletes who love the water, it will also showcase all the great aspects the Mount has to offer. Thanks to the support from Steve Bird Winery & Vineyards, we've developed a new concept for New Zealand surf sports and we can look at making this a truly iconic event."

The Coolangatta Gold began in 1984, as a backdrop for the movie of the same name.  It has since grown to a $100,000 extravaganza - Ali Day and Liz Pluimers each took home $25,000 for their respective wins in the main race on Sunday.

The young Mount Maunganui lifeguards were able to train with former Tauranga ironman Mike Janes, who now coaches the Mermaid Beach club squad on the Gold Coast, in their preparation for the race.  They also stayed with former New Zealand representative Michael Waide, who has raced the Coolangatta Gold in the past and was able to pass on his experience and knowledge of the beach.

"For three weeks, we lived and breathed surf lifesaving at one of the homes of the sport," Treanor explained.  "It was amazing being able to swim in open water every day and we went paddling with whales a couple of times.  Coming from a New Zealand spring was a bit of a shock but spending the extra time there beforehand really made a big difference, especially with the support and advice we had on tap."

Chaffing and sunburn has seen the pair gently ease back into training this week, though their focus has quickly turned to the summer season which begins in monstrous fashion.

The pair weren't the only Kiwis to feature in the Cooolangatta Gold - Papamoa's Kim Harker finished second in his agegroup, while husband and wife Johanna O'Connor (Mount) and Danny Morrison (Mairangi Bay) collected silver in the open mixed teams, a particularly note-worthy effort considering they were competing against mostly four-person teams. 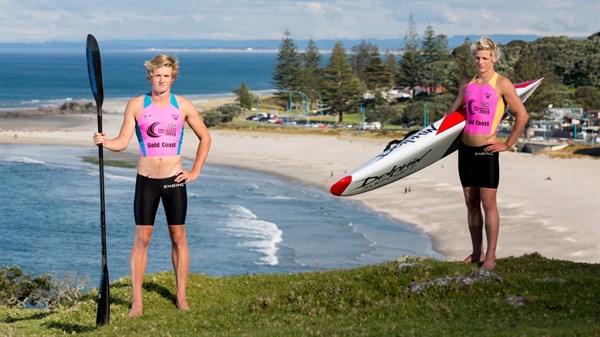