The Blues Awards, presented in association with BNZ, are awarded to students in recognition of their outstanding achievements in both sport and academic studies. Previous recipients include Mt Maunganui clubbie Lisa Carrington along with Hamish Bond and Juliette Haigh.

Laura is studying towards a Bachelor of Communications. She was also a member of the Black Fins team who won the title of lifesaving world champions at Rescue 2012. The 4x50 metre obstacle relay team won gold and set a new world record, and Laura gained an individual bronze in the 50 metre manikin carry.

Laura is also the Auckland Women's 100 metre backstroke champion, for which she received the Jean Ponder Memorial Shield, and she competed in the World University Games in Russia in July.

Hockey player Hugo Inglis was named Sportsman of the Year. Hugo is a fourth-year student studying towards a Bachelor of Business Studies, majoring in Finance with a minor in Politics. 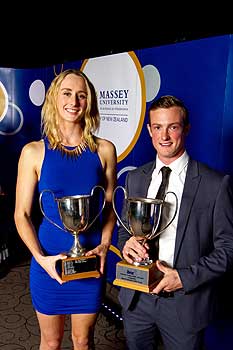