Challenges for Chris- the finish line

Then, she completed the Vitruvian half Ironman distance triathlon through Leicestershire which involved a 1.9 kilometre swim and 85 kilometre cycle, topped off by a 21 kilometre run. And finally, this weekend, she will take part in the Pembrokeshire Coast Challenge, which involves running 42 kilometres a day for three days (a total of 126 kilometres) along the rugged Welsh coast.

Desiree decided to undertake these four different challenges in memory of her older brother who drowned last year. Christopher Perreau drowned in Mokihinui on the West Coast in January 2012 and lifeguards from the Buller Surf Life Saving Club responded very quickly and recovered Chris's body.

"Though nothing could be done to save Chris, the team from Buller Surf Life Saving Club worked heroically to recover his body within hours. This meant we could have Chris at home with us to say our goodbyes, goodbyes that were tragically many years too soon, but were incredibly healing for all of Chris's family and friends," she says.

On her final challenge, Desiree won't be alone. "This time my husband Jeff and my mad mates Trish and Roberto will be joining me and we'll be running, walking and crawling up hills totalling 3,888 feet (1,185 metres) of which nine are category five climbs- meaning they're very high and steep," she says.

Desiree has covered all the costs of the events herself and says all donations will go directly to Surf Life Saving New Zealand. So far, she has raised close to £3,000 (around $5,700 NZ dollars). "I'm incredibly humbled by all your support," she says. 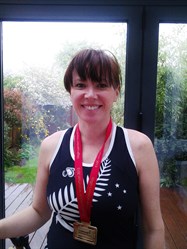