Kiwis make their mark at the BeNe Cup

The Kiwis put on a top display at the BeNe Cup over the weekend with Steve Kent and Samantha Lee taking out top male and female for the cup.

The team consisting of Steve Kent (Titahi Bay) and Samantha Lee (Lyall Bay) along with Laura Quilter (Wainui) and Chris Dawson (Midway) arrived in Amsterdam on Friday for the first ever BeNe Cup (Belgium/The Netherlands) which was held in Antwerp, Belgium on November 16 and in Eindhoven, The Netherlands on November 17.

The competition comes ahead of the 2013 International German Cup which kicks off in Warendorf on Friday and runs through until Sunday.

Highlights from Day One on Saturday included Steve and Samantha both taking out gold in the Men's and Women's 200m Obstacle Race.

Laura just missed out on breaking the New Zealand record in the Women's 100m Manikin Tow With Fins and came in third place. Steve took out fifth place in the men's event.

Team Coach and Manager Scott Bartlett says it was a solid start to the event considering the athletes had only been on the ground less than 24 hours after a very long trip.

Day Two of the competition saw Steve set a new New Zealand record as he took out second place in the Men's 100m Manikin Carry.

Steve and Samantha both took out gold in the Men's and Women's 100m Rescue Medley before Samantha stole another gold in the Women's 200m Super Lifesaver, while in the men's event Steve came in second followed by Chris in fifth place.

To top off a great day in the pool, Steve and Samantha were then crowned overall top male and female for the BeNe Cup.

Mr Bartlett says he was very happy with the team's performance. "It was a good opportunity to track our progress against the Europeans and Australians ahead of the next weekend's German Cup and there's still plenty of work to do before then," he says.

The team now has a few days of training ahead of them before moving on to Germany. The German Cup kicks off at 9pm on Friday night New Zealand time.

View www.surflifesaving.org.nz/germancup for the latest updates and full results with times. 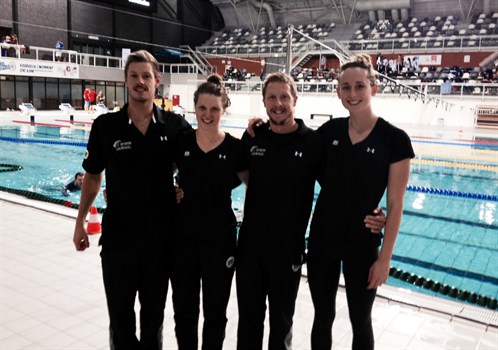