It may look like the best fun to be had on a sweltering Bay day but a leap off the blowhole at the end of Moturiki Island also had some serious intent for a group of Mount Maunganui surf lifesavers recently.

Mount Lifeguard Service coach John Bryant put his squad through their paces over the weekend, testing out part of the course that will be used in next month's inaugural Mount Monster long distance race.

Entries for the $7000, 25km race opened this week.  Competitors will paddle, run and swim along one of New Zealand's most iconic pieces of coastline, with one of the legs involving a run out to the blowhole, a jump off and a swim back into shore.

Bryant has used that particular feature as a training tool for years and knows it will help make a unique event even more memorable.

"The blowhole jump isn't just a test of nerves, it's a valuable training tool for our lifeguards," Bryant said.  "We've had a number of rescues around the rocks at the end of Moturiki Island over the years and our lifeguards need to know how to safely negotiate entering and exiting the water.  It's also a whole lot of fun - once you've conquered your fear - and it gives the Mount Monster race an extra special piece of local flavor."

Saturday's training session had a slightly different flavor, with Bryant's squad towing skis and boards, running in flippers and using kickboards to get back in from the end of the island in a grueling hour-long session.

The Mount Monster, presented by Steve Bird Winery and Vineyards, will take place on December 21 with a number of top athletes expected to feature.

A team section has opened the event up to specialist surf athletes and those who prefer to tackle just one or two of the legs, with teams consisting of either two or four members. 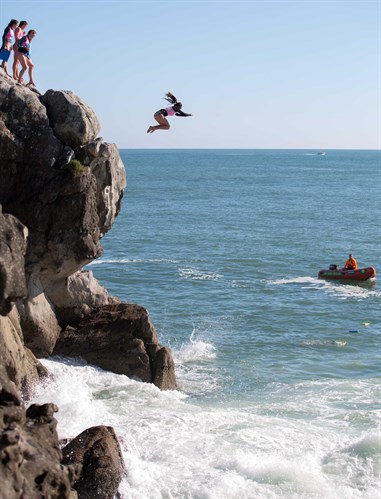