Tolaga Bay Surf Life Saving Club was officially presented with their brand new IRB from BP today through the Vote for a Boat online competition.

BP offered every club around the country two chances to win a brand new IRB worth over $20,000 and the community was encouraged to vote for their favourite club.

As the club with the highest number of community votes as of midnight on March 31, Muriwai automatically won the first boat. The remaining 72 clubs were put into a random draw for an equal chance to win. Tolaga Bay was announced live on the TVNZ Breakfast show as the winner of the second boat.

Around 300 people, including local school children, members of the surf club and the community, gathered in Tolaga Bay at lunchtime along with representatives from Surf Life Saving and BP for the official handover and a blessing of the new IRB.

Tolaga Bay Surf Life Saving Club Captain Kerehama Blackman says it's not just the club that's excited but the entire town. "That shows you how much the club means to the community. Everyone is stoked and the kids are wrapped they will have a new IRB to train on," he says.

BP Managing Director Matt Elliott says they are thrilled to see Tolaga Bay win the brand new IRB for their community. "This was the first time we had added in a random draw of all surf clubs to win as well as having the public voting in place as we recognised it can be hard for the smaller clubs to compete - Tolaga Bay is a very deserving club and an integral part of the East Coast community," he says.

Surf Life Saving's familiar orange IRBs are an essential part of lifeguard's rescue equipment, allowing them to pull hundreds of troubled swimmers from the water every year.

Surf Life Saving New Zealand CEO Paul Dalton says IRBs can often be the difference between life and death. "These boats really are an essential part of our lifesaving armoury. Once someone's in trouble in the water, we know we only have about three minutes to get to them. Our IRBs get our lifeguards out beyond the waves and to their rescue incredibly quickly," he says.

"BP has been supporting us for 46 years, allowing us to acquire around 250 boats that patrol our coastline. Thanks to their support, we now have the most advanced rescue fleet in the world." 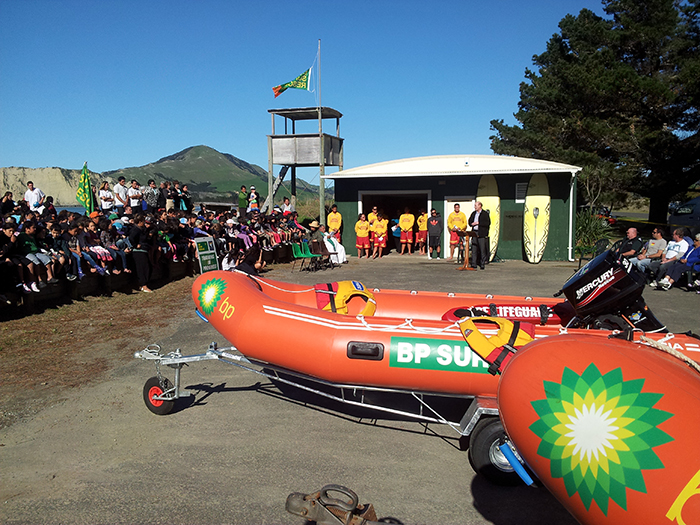