Capital Coast members were officially recognised for their hard work and dedication to saving lives on the Capital Coast's beaches tonight at the Surf Life Saving Awards of Excellence.

The celebration of surf lifesaving took place at the Titahi Bay Bowling Club.

The night's top award, Lifeguard of the Year, was awarded to Paul Carlyon of the Otaki Surf Life Saving Club.

The purpose of this award is to recognise a member who has made an outstanding contribution to the delivery and development of drowning prevention services. It is aimed at active surf lifeguards undertaking lifeguarding duties.

Paul is Patrol Captain and Club Chairman at Otaki Surf Life Saving Club and he has completed 72 hours of voluntary patrolling.

Having extensive experience as a patrol captain, Paul ensures less senior members of his patrol are given well supervised opportunities to extend themselves.

Throughout the season, Paul refreshed his qualifications as a lifeguard and IRB examiner, updated his first aid skills and completed a VHF radio course. As part of the Capital Coast Callout Squad, Paul also attended helicopter deployment and familiarisation training.

He has been a great role model for the young lifeguards of Otaki.

Surf Life Saving Regional Manager Tim Marsden says it takes a lot of commitment to be a lifeguard and the awards that were presented tonight are proof of that.

"Paul has given up countless hours to reach this level of nomination for Lifeguard of the Year and he truly deserves this recognition."

The night's other top awards included Volunteer of the Year and Rescue of the Year.

Mr Marsden says "the actions of all of the winners are the expression of our values, and it's the best of those values we celebrate with our awards," he says. 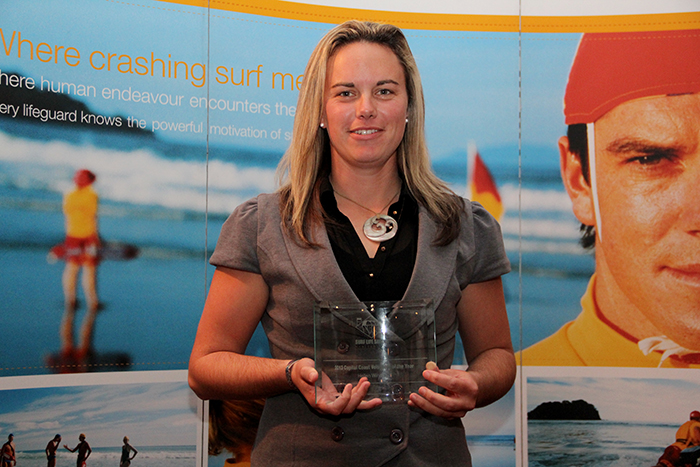 Foxton's Hellen Windley with her Volunteer of the Year award. Photo taken by Jamie Nilsson