The Muriwai Surf Life Saving community is mourning the loss of a local man who played an active role in the lead up to last weekend's opening of the new surf club.

Husband and father of one Adam Strange died on Wednesday after being attacked, by what is thought to be a great white shark, while swimming around 200m offshore from Muriwai Beach.

Lifeguards were first on the scene racing out in an Inflatable Rescue Boat (IRB) within minutes of the call for help. They tried circling the shark to scare it away but it kept hanging around. They even tried clubbing the shark on the head with one of the paddles of the boat to try and make it move away but it would not surrender Mr Strange from its grip.

A second IRB took an armed Police officer out who shot at the shark a number of times and it disappeared from site. Lifeguards were then able to retrieve Mr Strange's body from the water and return him to shore.

Mr Jago says because nothing like this has happened for 40 years in mainland New Zealand there is no standard operating procedures for this type of thing. "There was a great depth of experience on the beach and they instinctively knew what to do. The operation went seamlessly," he says.

Muriwai patrol captain Danny Tenheuvel says they responded like they would to any other serious incident. Three regional lifeguards were on duty and it was lucky that there were some visiting volunteer lifeguards on hand to help out, he says. "There were 150 kids on the beach at the time that had just come out of the water so we dropped the flags and closed the beach," he says.

Mr Tenheuvel says by having three guards on they can deal with general lifeguarding duties but when a serious incident like that happens they can become quite stretched. "Having the volunteers and callout squad was great but it could have easily only been the three of us on duty," he says.

A debrief was held at the club that night and the lifeguards have been offered counseling and support.

A tapu-lifting ceremony was held at Muriwai Beach yesterday morning on the rescue boat which brought Mr Strange ashore and at the surf club, where his body lay for a few hours on Wednesday.

West coast beaches from Karekare north were closed on Wednesday following the incident. All beaches have now returned to normal operating status other than Muriwai which will remain closed until Saturday. This decision has been made by Auckland Council together with Surf Life Saving Northern Region, Police and the Department of Conservation.

Although the chances of a shark attack like this are very low, Surf Life Saving has some guidelines in place for safe swimming and to help reduce the risk of incidents involving sharks and humans.

Patrolled areas marked by the red and yellow flags remain the safest place to swim.

Surf Life Saving Northern Region lifesaving and club support manager Tom Burgess says swimmers should always obey the advice of Surf Lifeguards and heed all flags and notice board warnings. "Leave the water immediately if a shark is sighted or if advised by the Lifeguards that a shark has been sighted. If you site a shark yourself make sure you alert others," he says.

Mr Burgess says it's only natural that people may feel nervous about entering the water but a few general rules will help reduce the risk of a shark attack taking place.

"Swimmers should avoid entering the water after dusk, at night or before dawn when some sharks are typically more active. You should also avoid swimming in or near murky or silt-laden waters or near schools of fish. Never swim or surf alone and of course, one of our key safety messages is always - if in doubt, stay out," he says.

Mr Burgess says they have also sought expert advice from their counterparts in Australia and from the Department of Conservation's shark expert. 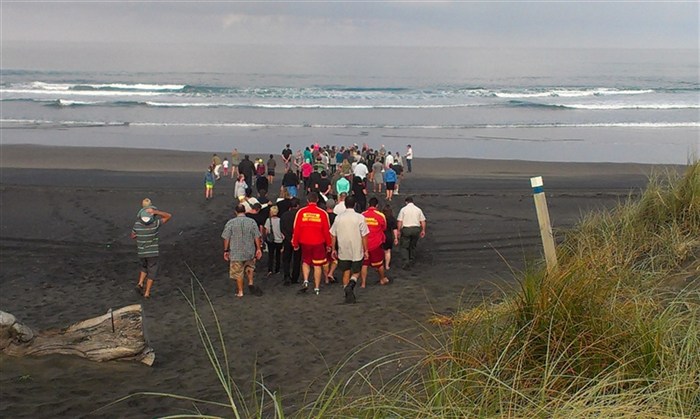