Most of his Australian rivals are taking a well-earned break this weekend but Red Beach surf lifesaver Chris Moors will throw himself once more into the breach as a hectic season draws to a close.

The 28-year-old will lead his club's 98-strong team into the 91st State New Zealand Surf Life Saving Championships in Mount Maunganui hoping to match his ironman-winning performance the last time the nationals were at the Bay of Plenty beach two years ago.

And he's had a debut season on the tough Kellogg's Nutrigrain professional series across the Tasman to prepare him, with a series-best seventh-placing in the last round at Noosa last week.

"It was great to finish on a high at Noosa and that gives me a bit of confidence moving forward to the New Zealand nationals," Moors said. "It will be interesting to see if i can hold it together and back up for another weekend of racing at the Mount - most of the other guys in the series are on a mini-break recovering getting ready for next month's Aussie titles."

Moors has learned a great deal over the last three months, including the importance of getting the little things right.

"In so many races if you make one error, no matter how small, that's it - race over. Having the right mental state was also crucial - in the earlier rounds I found myself thinking 'let's not get smashed by everyone' but you've got to truly believe you can beat if not match all the guys on the line."

Nearly 1700 competitors will line up at the four-day championships, which start tomorrow with the masters (30+), followed by three days of under-16, under-19 and open competition.  A big pulse of swell is expected for the weekend, where Moors' ironman rivals include New Zealand team member Max Beattie (Omanu), Mike Janes and Cory Taylor (Midway) and Gisborne's Ollie Puddick (Wainui).

"It's going to be really hard to win the ironman again this year as there will be 16 guys in the final and all are capable of winning it on their day," Beattie, who is returning from his Gold Coast base, said. "With good preparation and a tiny bit of luck, hopefully I can make it back-to-back but Chris and Cory will definitely be the biggest competition. Cory is my best training partner back over in Australia and we're always pushing each other, while Chris has been doing the professional series all year and he looked awesome in the last round."

Puddick's credentials shouldn't be ignored either.  He dominated the domestic series in New Zealand, winning every ironman of the Sonic Surf Race Series he entered, missing the final with an ankle injury.

Defending ironwoman champion Devon Halligan is racing in Australia this weekend, leaving Orewa's Rachel Clarke is the only previous winner.  That's opened the door for a number of rising young stars like Natalie Peat (Papamoa). Danielle McKenzie (Mairangi Bay) and Mount Maunganui's Katie Wilson, who are all still racing under-19 as well.

Other features will be the age-old surf boat battle between Titahi Bay and Piha, with Titahi Bay's young crew looking to make up for missing the New Zealand spot to compete against Australia's best last month.

Mount Maunganui women's beach relay team will be eyeing their 10th consecutive title, with former world champion Holly Moczydlowski having appeared in every one, although Mairangi Bay have been boosted by four-time national flags champion Chanel Hickman and top Australian sprinter Hayley Wyper.

Organisers have introduced several safety measures this year, including compulsory pink rash tops for all competitors to help visibility in the water, while contingency plans has been developed to use Tauranga Harbour if ocean conditions get too dangerous at any stage. 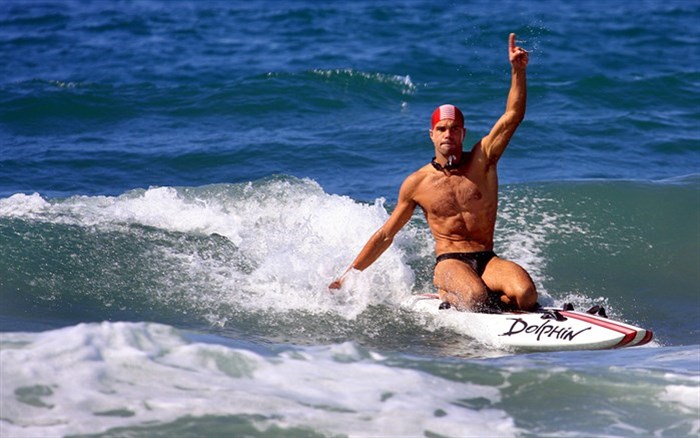 Red Beach's Chris Moors will be hoping for a repeat of his New Zealand ironman triumph at Mount Maunganui two years ago when he lines up at the same venue for the State New Zealand Surf Life Saving Championships.  Photo by Jamie Troughton/Dscribe Journalism