Nearly 350 drivers, crew and patients from 28 clubs are heading north for the traditional end of the competition season, six months of training, patrolling and racing.

Among them are rare competitive forays by the nearby Omaha and Ruakaka clubs, as well as Palmerston North, Hot Water Beach and Wanganui, while the five members from Otago's Kaka Point have the longest journey of the lot.

Included in their ranks are Hayden Gold and Luke Kuiti, who picked up a rare bronze in the under-21 single rescue at last year's nationals.

Waimarama's Mike Harman and Ben Cross, Paekakariki's Richard Whinham and Mitch Logan and the consistent Muriwai pairing of David Butt and Brent Matuschka, are also expected to hunt keenly for the premier spoils.

The women's division is again expected to be dominated by the classy St Clair pairing of Carla and Steph Laughton, who won gold in the tube rescue at the Rescue 2012 world championships in Adelaide in November, along with patient Rachel Craythorn.

There's also a serious side to the IRB racing, one perfectly demonstrated by Sunset Beach's under-21 racers Mark and Shane Edwards, who were involved in a dramatic triple rescue earlier in the summer.

The pair rescued a 41-year-old man and his two daughters, aged 14 and 11, at the Port Waikato beach, in a text-book IRB rescue. Shane Edwards featured heavily in the North Island IRB championships in Whakatane, which Sunset Beach won for the first time, with hours of training and rescue simulation paying off in spades during the real-life situation.

Racing begins on Friday afternoon, with action in premier, senior, women's and under-21 divisions continuing until Sunday.

Follow the live results throughout the weekend at events.surflifesaving.org.nz. 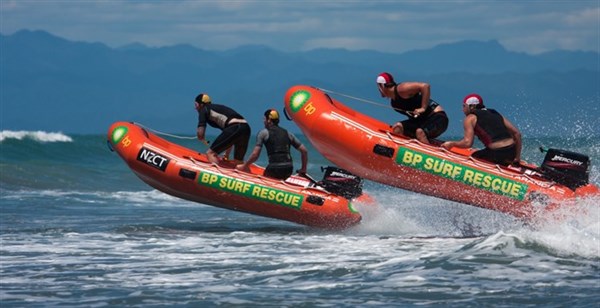