Foster (South Brighton) won his first title in 1995 and had racked up nine titles by 2006 but has lived largely in the shadows of Fitzroy's five-time winner Paul Cracroft-Wilson since.

Cracroft-Wilson had knee surgery six weeks ago, however, and stumbled when it came down to the final four and let third-placed Toby Harris (Wainui) sneak through.  The crowd, sensing Foster's relentless pursuit of history, then got behind the aging warrior.

"This is as big as my first one in 1995 when I was 18," a jubilant Foster said.  "You take a few for granted when you're at your peak and you don't remember how much they mean to you until they become harder to get."

"There's a lot of guys who've trained just as hard as me and been just as competitive who haven't been lucky enough to win and I can really appreciate that now.  The thing about being 37 is that I wake up some days and I'm superman.  I wake up other days and I'm not - luckily today was on."

Intriguingly, Mount Maunganui beach sprinter Holly Moczydlowski is also eyeing a similar slice of history tomorrow - her club has won the last nine open women's beach relay titles, with the 2006 world champion involved in every one.

With heavy 2.5m surf rolling into the Main Beach, the water events were switched the relatively sheltered Shark Alley along the coast, where Australian Eliza Smith grabbed her second gold of the carnival, pairing with Danielle O'Connor to win the open women's tube rescue. 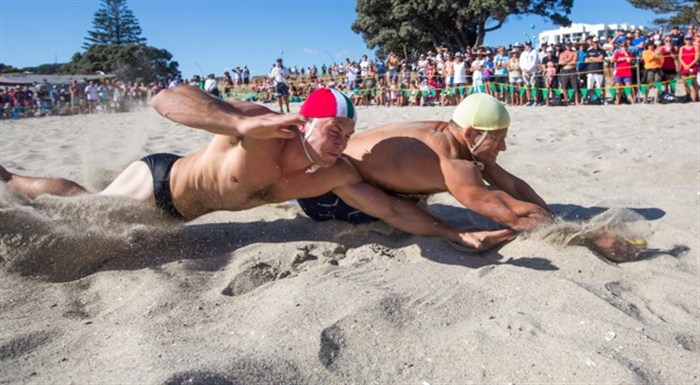