A decade ago, Omanu's masters ranks in surf lifesaving were thin to non-existent.  A small group of members, led by Lester Phelps, reckoned it was time to do something about it and started building what has become something of a dynasty.

That dynasty continued today with yet another overall win in the State New Zealand Surf Life Saving championships for athletes over 30 - but there were more important results than the 20-point victory over second-placed Mount Maunganui.

Omanu fronted with a record 67 athletes, joining nearly 250 other club members competing on Mount Maunganui's Main Beach in a range of events, as the masters concept continues to grow.

And one of the most satisfying sights was 57-year-old Phelps, the man who kick-started it all, completing the run-swim-run.  Two years after he began Omanu's masters campaign, he nearly died in a surfing accident at Matakana Island, injuring his spine a having to undergo lengthy rehabilitation.

Another spinoff from Omanu's masterful display in recent years has been the revival in other Bay of Plenty clubs.  Mount Maunganui, led by Damian Munro in the 30-39 agegroup and Mike Waide in the 40-49, nearly pulled off the unthinkable, swapping the lead with Omanu throughout the afternoon.

And Papamoa, led by Naomi Davoren in the 40-49 women and Kim Harker in the 50-59 men, finished third, ahead of Mairangi Bay and another Bay club, Whakatane in fifth.

But with their overwhelming numbers and tremendous team spirit, Omanu couldn't be denied - Jol McGarvey claimed overall honours in the 30-39 women but otherwise their performance was all about consistency.

Other special performances came from Omanu's Sid Salek, who turns 83 this month, grabbing third in the 70+ agegroup, while Ocean Beach Kiwi's Greg Larsen won his 22nd consecutive masters beach sprint title at the tender age of 63.

Today's carnival was held in sparkling Autumn sunshine, the perfect prelude to the State New Zealand Surf Life Saving open championships which start at the same venue tomorrow and go until Sunday. 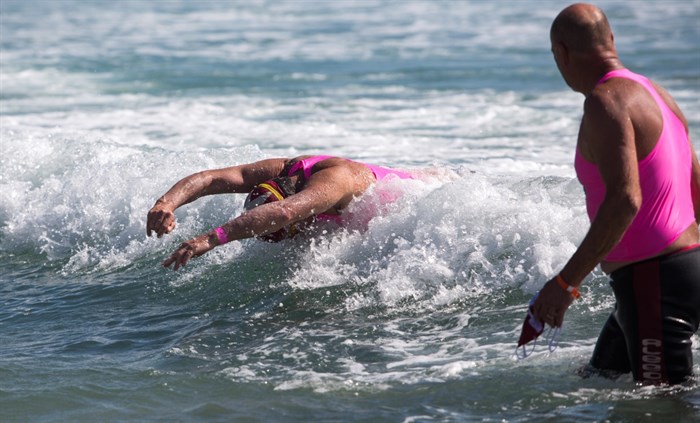 Omanu's Lester Phelps heads into the beach during the run-swim-run.  Photo by Jamie Troughton/Dscribe Journalism 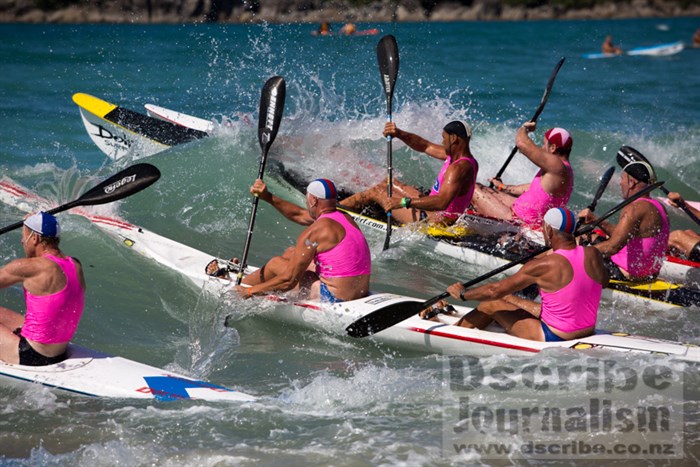