With a rising swell and big surf predicted for the weekend, organisers took heed of previous nationals and packed the first of three days with as many events as possible, with all the canoes and half the boat action already completed.

The surf ski competitors also had a packed day and in the thick of it, Carrington comfortably qualified for the open women's ski race final and later teamed with Mount Maunganui teammate Jaimee Lovett to win the open double ski.

"This is the first time we've paddled together since we won in 2009 and we haven't done any training but it just came together," McDowell said.  "We didn't seem to lose any timing out there which was lucky because it was a pretty strong field out there."

The canoe arena got through a massive day, with all long-course titles decided in the morning and short-course in the afternoon, an exercise which normally would've taken three days.

Taylors Mistake won the open women's long-course, while fellow Christchurch club Waimairi swept both long-course and short-course in the men's division for the second year in a row.

It meant team members Carl Righton and Mark Cresswell picked up their 10th canoe gold medal in the last 10 years, while it was also an early birthday present for team veteran Richard Phillips.

"We've held onto the old man Richard - he's 46 on Sunday - and it seems to work well so we'll keep it going as long as we can," Righton said. "We've been doing a lot of waka ama over winter and we had a bit of fitness to lean on in the long course but the short course was a bit more interesting with the shorebreak in the afternoon."

Down the road closer to Omanu Beach, the surf boat competition took advantage of a much fairer beach layout, with short-course titles also decided.

"We got smashed by a few waves on the way out - a few monsters came out of nowhere and set us back a bit but we managed to settle and get back into our work," crewman Ben Richards said.  "We managed to row down a little bump which got us ahead of Orewa and the rest is history.  It shuts up a few critics and it's definitely pretty satisfying."

The Omanu women's crew were confirmed as national series winners today and capped that announcement in the best possible way, grabbing their first national title together in the short-course final.

"We were so consistent all season and just to be able to finish it off with a national title and finally a gold is so nice," bow rower Kate Neiderer said. "Plus we're as close to our home club as we could get."

Officials will reassess conditions in the morning but in the meantime, after a frantic Friday, hosts Mount Maunganui had collected 37 points, seven ahead of Papamoa with Piha third on 17. 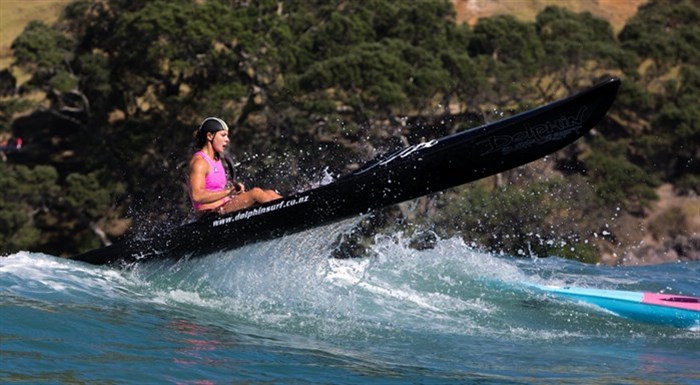