The 2013 Management Team at Red Beach Surf Life Saving Club (RBSLSC) has undertaken the responsibility to complete the planned redevelopment of the Clubhouse in the next two years. The Club has outgrown its Clubhouse and is seriously under-resourced for its rapidly growing membership.

The Club was formed on the 31 May 1953 as a result of a tragic drowning and from a handful of committed individuals and 25 members in the first year - the Club has now grown to in excess of 900 members. Since the 50th Jubilee ten years ago, the Junior Club has doubled from 242 members to just over 400 in 2013.

The first RBSLSC Headquarters in 1959 was situated on the Red Beach Waterfront Reserve. This building served as the Surf Clubs home-base for 24 years. The existing building was built in 1983 on the current site and has also served the Club well for 30 years.  However to continue to grow, the Club needs to begin the next stage of Clubhouse development now.

The next phase of developments estimated cost is $520,000 and this will be gained through a mixture of existing funds, grants, bank borrowing and fundraising. On the Club and Community fundraising side - a target has been set at $200,000. Club members are over-whelmed at the generosity of Bryan and Pat Heron donating $80,000 to "kick-start" the fundraising campaign. The remainder will be raised through gifts, events and special club member opportunities and fundraising initiatives. A unique donation card initiative and special Red Letter Box has been set up at the Club to cover numerous donation options.

Over the last couple of years the first stage of the planned redevelopment of the Club was completed, with the ablution block downstairs being upgraded and the deck completed to provide an outstanding outdoor area. Stage Two will see the utility room and toilets in South West wing closed in and the building of the new North West extension including gear sheds and lounge/meeting room. Stage Three includes re-cladding the complete exterior of Clubhouse and the internal fit out including bar and kitchen renovations. The intention is to have the grand opening of the redeveloped Clubhouse in October 2014 to coincide with the opening of the 2014 surf season. 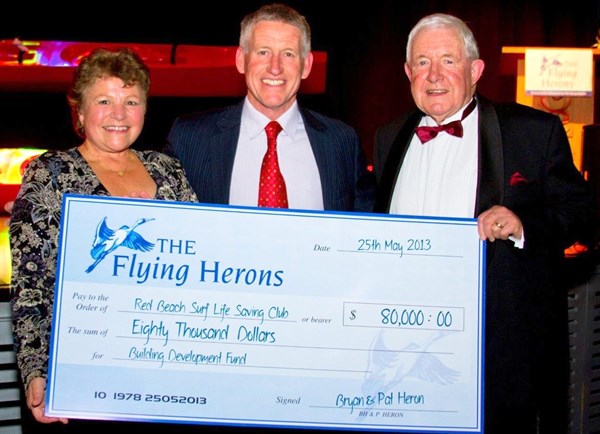