Surf Life Saving New Zealand is pleased to announce Mark Weatherall and Brent Wilson have been appointed to the High Performance Team Manager positions of the Open and Development Team respectively.

Mark brings a wealth of knowledge and experience to the role having been the New Zealand Open Team Manager for the successful Rescue 2012 campaign, where New Zealand were crowned World Champions for the first time on foreign soil. He is the last of the three member Management Team to be re-appointed for the 2014 campaign.

Brent has acted as the Assistant Manager to the Open Team during two previous World Championships, as well as substantial experience managing Surf Lifesaving teams in other International competitions.

SLSNZ Sport Manager Bradley Simpson says he is really looking forward to working with both Managers in helping to ensure our teams perform at their best in the pool and on the beach. "Both Managers have a considerable amount of experience and success in managing international surf lifesaving teams. I believe this will pay dividends in the lead up to, and in, Rescue 2014," he says.

The Open Team will be competing in the International Surf Rescue Challenge in Japan in September, and it is hoped that the Development Team will be able to join them on a self-funded basis .

Mark and Brent start the role immediately, please join us in wishing them all the best. 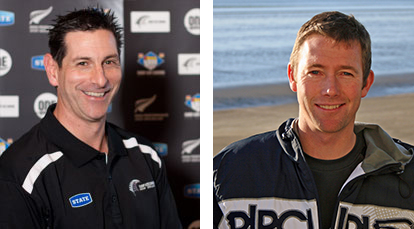