In November last year, Adshel joined forces with Surf Life Saving New Zealand (SLSNZ) for their annual Adshel Creative Challenge. A key event in the industry calendar, the Creative Challenge aims to promote best in class creative principles for the effective use of Adshel's outdoor media as well as offering much needed support for SLSNZ.

The focus for the event was to develop an Adshel campaign that would raise awareness and funds for Surf Life Saving during the winter season. Last year the event attracted an impressive 75 creatives, in 16 teams from Auckland and Wellington who had just 60 minutes to develop a winning brief response.

The challenge was to show that while everyone is pining for summer during the winter months, over 16,000 lifeguards throughout New Zealand are training for it to ensure they are in top shape to protect beach-goers once summer rolls around.

Surf Life Saving New Zealand CEO Paul Dalton says "the Winter Appeal is an important event for Surf Life Saving to raise much needed funds along with awareness of lifesaving services at a time when the beach isn't front of mind.

"It's all about protecting our community in the water.  The safety of people on the beach is our core business and lifeguards patrolling the beach is an integral part of that.  The beach is New Zealand's favourite playground and with your support we can ensure lifeguards are there for you when you need them," he says."

The level of creativity shown on the night was outstanding but there could only be one winning concept, 'Give Us a Hand', which came from Ben Polkinghorne, Scott Kelly and Salah Ben-Brahim of Colenso BBDO.

The 'Give Us a Hand', campaign, which includes three strong supporting messages; 'Without Your Support We Wouldn't Exist', 'What if the Bus Never Came' and 'We Haven't Taken a Holiday in 102 Years' was launched this week in 150 bus shelters across New Zealand.

"We are very proud of our Creative Challenge event and the opportunity to support the Surf Life Saving New Zealand Winter Appeal.

The Creative Challenge really encourages participants to think about the most effective creative execution for our format and the winning concept from Colenso is a great example of this.

The 'Give Us a Hand' campaign aims to put SLSNZ at the forefront of people's minds to help drive fundraising for the not-for profit organisation during the quieter winter months. It features both 'text to donate' and 'online giving' call to actions which will be the key driver of fundraising for the Winter Appeal.

Vile adds: "The campaign will be visible on our shelters from major business districts to outer lying suburbs which offers SLSNZ the opportunity to really engage with the community and maximise their fundraising efforts."

The campaign is live until 30 June. 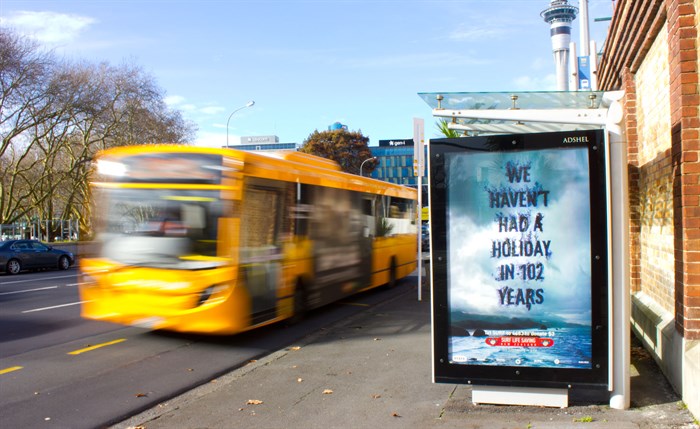