Winning the Surf Life Saving New Zealand Lottery (number 21) was a belated birthday present for a DHL employee who scooped the top prize less than a week after his birthday.

Fred Nathras, who is into his second year working as a Customs Broker at DHL in Auckland, has won the first prize of a new Holden worth over $46,000.

As a result of being drawn as the lucky winner on June 24, Fred got the choice of one of three new cars. As he purchased multiple tickets, he also won a bonus cash prize of $10,000.

They plan to take a leisurely three day trip home while taking in some of New Zealand's beautiful sights, he says.

When Fred and his family left South Africa five years ago he was going to sell his wife's car but instead they gave it away to a friend in need. Fred's friend told him 'one day you will be rewarded for all the generosity that is always you.' Words, he says, that to this day he has never forgotten.

Fred says the extra bonus of $10,000 will go a long way towards achieving his other dream which has always been to have a private pilot's license. But he says winning something like this isn't just about the prizes. "There's the satisfaction that the money you are paying for the tickets is for such a good cause, hence why I bought 21 tickets- what an odd number!" he says.

Fred says he has always supported surf lifesaving, having grown up on the South Coast in South Africa, so he enjoys working for a company who also supports the organisation. "The way in which they support such a worthy organisation such as Surf Life Saving speaks volumes in their efforts to ensure that our beaches are kept safe," he says.

As a major partner of Surf Life Saving New Zealand, DHL has been supporting the organisation for nearly 10 years.

As a charity organisation, Surf Life Saving relies on the public's support to keep trained lifeguards on its beaches every year.

If you would like more information on ways to support Surf Life Saving visit www.surflifesaving.org.nz/supportus.

All lotteries are drawn under Justice of the Peace supervision. 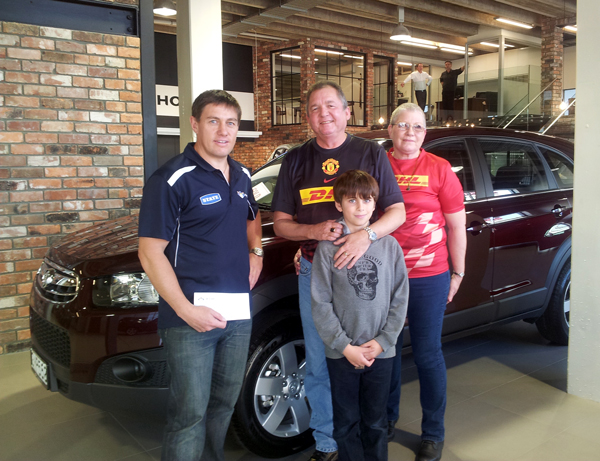 SLSNZ's Matt Warren with Fred and Bev Nathrass, their grandson Blake and their new Holden