The New Zealand public rallied behind Surf Life Saving for its inaugural Winter Appeal which took place from June 17-30 and as a result we are continuing our text to donate across July and August as we gear up for Summer.

The 'Give Us a Hand Campaign' aimed to raise much needed funds and awareness of the essential rescue charity at a time when the beach isn't at the forefront of people's minds.

Principal Partner State held a mid-winter Dip in Auckland on Friday June 21 which included a number of their staff along with Surf Life Saving New Zealand CEO Paul Dalton and ambassador, singer-songwriter Jamie McDell. State also worked to provide collection points at each branch and have engaged their policy holders to support the Appeal.

A second dip was also held at Oriental Bay in Wellington on June 28.

Charity partner the Wellington Phoenix issued a challenge to the New Zealand public, businesses and companies that if a fundraising target of $10,000 was reached in support of the appeal before 8am on June 28, the footballers would take a paddle in the harbour.

Surf Life Saving partner BP offered to match $1 for $1 up to $5,000 to help reach the target before Friday. Managing Director Matt Elliott, Retail General Manager Frank van Hattum, who doubles as the chairman of NZ Football, and External Affairs Manager Jonty Mills took the plunge along with a number of other BP staff.

Her Worship the Mayor of Wellington Celia Wade-Brown and Run the Red's Chief Technology Officer Doug Dixon also joined the line-up. State staff from the Wellington State Insurance Office also joined in and raised just over $700 in support.

Last season around 4000 lifeguards spent over 200,000 hours patrolling 80 beaches, saving over 1,600 lives. While most Kiwis were out enjoying their summer, volunteer lifeguards gave theirs up to help keep the community safe in the water.

Summer is not far away and we want it to be a safe one. It's not too late to support the Winter Appeal. Text WINTER, DIP or SURF to 4483 to automatically donate $3 or visit www.surflifesaving.org.nz to make a donation online.

Check out all the photos from our two Winter Dip events on our Facebook page. A special thank you to photographer Craig McGhie for taking all the Wellington shots and to the team at State for providing photos of the Auckland event. 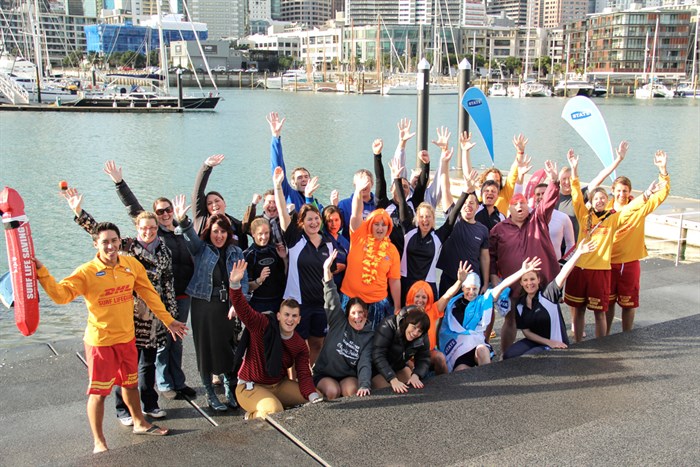 State's With you in the Water partners (SLSNZ, Quantum, Swimming NZ) and State staff join together to take the plunge into Auckland's Viaduct Harbour in  support of Surf Life Saving's Winter Appeal.