Two 17-year-olds stole the show at the Eastern Regional surf lifesaving championships in Whangamata over the weekend, as big surf caused chaos in the craft arena.

Mount Maunganui teenager Katie Wilson showed her recent win at the Central Region titles was no fluke, holding off 18-year-old rival Natalie Peat to win the open ironwoman crown, adding to a solid victory in the open board race.

The other 17-year-old success story was New Plymouth Old Boys flyer Scott Murfitt, who grabbed the open and under-19 beach sprint double, heading off evergreen 36-year-old Morgan Foster in the open race.

Blustery onshore winds kicked up a solid 1.5m swell on the final day, with sweep oars snapping like matchsticks in the surf boat arena.  Organisers abandoned all divisions except for the open men's, where Titahi Bay's rookies outlasted their rivals in a grueling long-course final, heading home Orewa and Mairangi Bay.

Reigning national champions Piha were among the crews to capsize, though their frustrating weekend was softened with their selection as the New Zealand crew to race the top Australian crew in Waihi next month.  Mairangi Bay were picked as the women's representatives after a two-month selection process.

The gnarly conditions again suited Gisborne 21-year-old Ollie Puddick in the open ironman, as he picked up his third win in as many races in the Sonic Surf Race series.  Puddick waited as Papamoa's Ben Johnston led out in the board and ski legs before pouncing in the swim.

"A couple of years ago, the order would've worried me, when my board was by far my weakest leg," Puddick said.  "Cory Hutchings used to say work on your weakest leg and I've managed to turn it into one of my stronger ones. It was just a case of racing smart and not getting ahead of myself, not losing my board or making any mistakes and I'm pretty stoked to do what I came here to do." Red Beach's AJ Maney picked up an impressive second, with Mount Maunganui's George Haynes finishing third.

Haynes' clubmate Wilson, meanwhile, had to fight off strong charges from her teenaged rivals Natalie Peat (Papamoa) and Danielle McKenzie (Mairangi Bay), with McKenzie opening up an early lead on the board and Peat striking back in her specialist swim leg.

"Natalie caught me up at the second can and we both caught a wave into knee-deep water - I looked over and thought 'nah - I'm not going to let her out-sprint me this time' and I managed to get there," Wilson said.

It gave Wilson a one-point lead in the Sonic ironwoman series, with the grand final to be held during the national under-14 championships in Mount Maunganui next month.

Murfitt is the son of former Taranaki rugby wing Dwight, with the paternal genes showing through as he stopped Foster winning the beach flags/sprint double.  Even more impressive was the fact the teenager only got back from a trip to Australia on Friday and this was his first race back after six weeks out with a hamstring injury.

"I couldn't believe it when I saw Morgan out of the corner of my eye but I just kept driving my arms and kept going," Murfitt said.

His clubmate Olivia Eaton, still eligible for the under-16 division, also proved the step up was no problem by winning the open women's beach sprint from Briar Wilkie (Midway) and reigning national champion Arna Wright (Mount Maunganui), who is also coming back from injury.

Ocean Beach Kiwi pair Scott Bicknell and Hamish Beattie led from the front in a brutal open men's double ski, hit by walls of water on the way out, while young Fitzroy pair Rebecca Cole and Sarah Wilson took out the open women's double ski.

Mount Maunganui won the open men's taplin and the open women's beach relay, helping them clear out in the overall club points tally.  They finished with 124, well clear of Papamoa (88) with Red Beach three points further back in third.

The men's double ski competitors head out through the Whangamata surf at the Eastern Regional surf lifesaving championships. Photo by Jamie Troughton/Dscribe Journalism 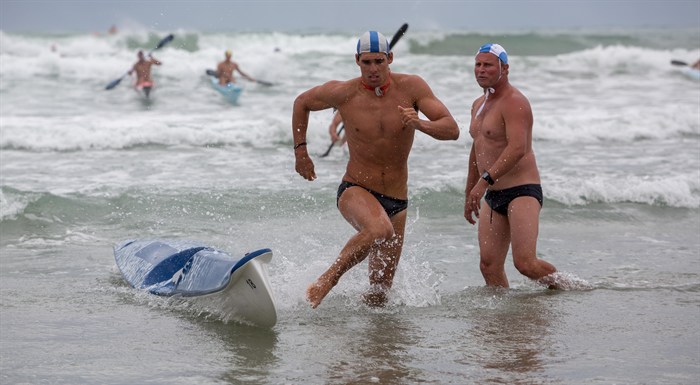 Wainui's Ollie Puddick heads into transition during his ironman win at the 2013 Eastern Regional championships, the third round of the Sonic Surf Race series, at Whangamata from Jan 26-27. Photo by Jamie Troughton/Dscribe Journalism