The A-crew from Auckland's west coast have been picked to row against the top Australian club next week at Waihi Beach, although first they've got to get through the third round of the national series at their home beach on Saturday at the Piha Big Wave Classic.

It's an event which should live up to its name, with clean, long-period 2m swells forecast to hit on Saturday afternoon, providing the perfect warm-up to the trans-Tasman challenge a week later.

"We didn't make it easy for the selectors in the end but we've been working on a plan to be as fast as possible come February 9," Bourneville, the former Kiwis rugby league star, said.  "We didn't want to be the fastest crew on the planet in early January because it would've been hard to hold that form for six weeks. Titahi Bay have really stepped up their game and they're now a very good, really tight crew, which is pretty healthy for the surf boat scene in New Zealand.  They came really close to grabbing that selection off us and I can understand they'd be disgruntled by missing out but we're going to do our best against the Aussies on behalf of all of them."

Wil McDowell-swept Titahi Bay won the long-course title at a brutal Eastern Regional championships last week, adding to their win in the second round of the series, also at Whangamata.

But Piha have strong pedigree, not only dominating the national scene over the last couple of seasons but also their rivals at the Australian Surf Rowers League championships last year.  They've promoted Richards from their champion under-23 crew and have taken time to adjust to new combinations.

Bourneville sees this weekend as a great chance to row themselves into top form, excited about the forecast.

"The main thing is it's going to be a really clean wave, with offshore winds and a long-period swell - it's saying we could get up to 16 or 17secs between waves, which is pretty much as good as you can get, giving crews a chance to regroup after each wave. It should be a lot of fun out there."

Queensland club Tannum Sands is sending two crews ore to compete, although their travel arrangements have been hit by the state's disastrous flooding, while 10 women's crews have also signed up to race.

Numbers are down slightly from last year, mainly because of the crews that suffered damage - to both boats and bodies - during the fierce onshore conditions at Whangamata last week. 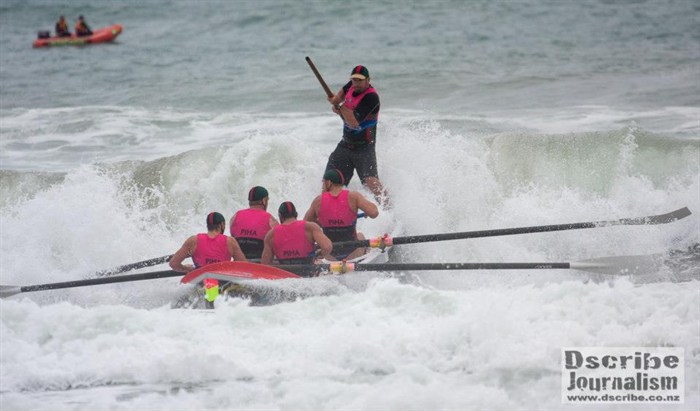