The Wellington club has travelled extensively this season, courtesy of a major winter fund-raising push, and that effort is starting to pay off for athletes with the major summer events now on the horizon.

Swim specialist Moffatt picked up two gold medals in the competitive open women's division, winning the board rescue with Tori Watt and taking out the tube rescue with Karly Maxwell, while Van Der Wilt was even more successful in the under-16 division.

He held off New Plymouth Old Boys swimmer Talor Owen to win the surf race, then joined teammates Ben Manners, James Moore and Tom Oolders to win both the beach relay and the under-16 taplin relay.

Those efforts helped Lyall Bay into second overall, behind the strong New Plymouth Old Boys club, collecting 53 points and finishing ahead of Papamoa (43) and Fitzroy (36).

Paekakariki, helped in no small part by the Forbes brothers, finished a valiant fifth on 35 points after an equally productive outing.

Ocean Beach Kiwi's Kieran Kruger took out the under-16 ski race, while OBK also enjoyed success in the canoe arena, winning the open men's title and the under-19 women's crown.

The championships coincided with the second round of the Sonic Surf Race, with Gisborne's Ollie Puddick (Wainui) clean-sweeping the open men's division. A month after winning the ironman at the first round of the series in Whangamata, the 21-year-old Puddick took home the surf race, board race, ski race and ironman titles.

Mount Maunganui 17-year-old Katie Wilson pulled off an upset in the ironwoman race, hanging tough in the swim and board legs, before pouncing on the ski to head home round one winner Natalie Peat (Papamoa) and Mairangi Bay's Danielle McKenzie.

The next round of the Sonic series is at the Eastern Regional championships at the end of the month, with nearly 800 athletes expected to compete in the Coromandel holiday spot. 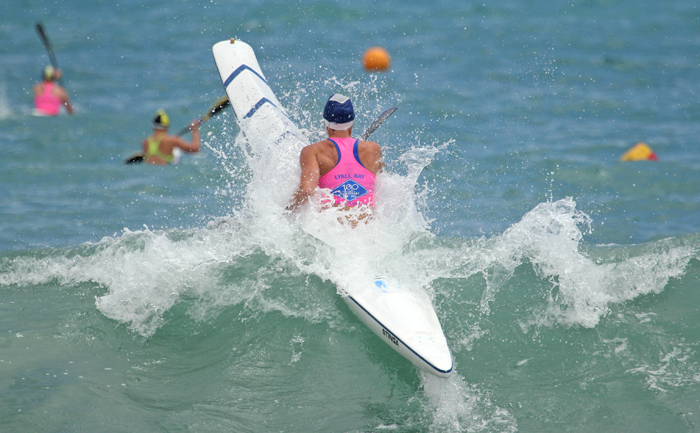