Another year of upsets at Whangamata surf boat round

A new year bought the same old result at the second round of the national surf boat series in Whangamata today.

Men's favourites Piha and leading ladies crew Mairangi Bay fell at the final hurdle for the second year running, beaten into second by crews from Titahi Bay and Orewa respectively in deteriorating 1.5m surf at the Whangamata Surf Boat Spectacular.

Piha have been the form crew for the past three seasons, while their traditional arch-rivals Titahi Bay rebuilt their ranks.
But the mostly under-23 Titahi Bay crew that won in Whangamata last year proved it was no fluke - Jono Boyd, Jordan Te Paa, Nick Boyd and Charles Graham powered their way into the lead in the final and young sweep Wil McDowell held them firmly on the winning wave back into the beach.

"We've just been doing a lot of training and a lot of hard work and it paid off, although we did have a bit of luck as well," Jono Boyd said.  "Fitness came into it as well but to be honest, anyone could've won that final. We just did the hard work out there and made it to the cans in front and were able to bring it home."

Mark Bourneville's Piha crew, winners of the first round in Wellington, grabbed second, with Muriwai coming home in third.
Like Titahi Bay, the Orewa women's crew had three members of their winning team back, in Nicky Jones, Breana Franich and Natassia Randell.  With 18-year-old Rebecca Ash added to the crew swept by Mark McCarthny, Orewa found something extra in the final after mediocre early form.

"It's unbelievable - this is the second year we've done it and it just must be our carnival," an elated Jones said.  "Our heats weren't that great but we got into our rhythm this time and somehow came out of nowhere to pull it out in the last race.  Luck was definitely with us."

Omanu also contributed to another dramatic final, winning the under-19 men's final with a rookie crew.  Fraser Kirk and James Martin both had a season with Mount Maunganui last year but enlisted New Zealand junior squash star James Cooper and George Cortesi to produce a winning combination.

They were helped when the strong Piha crew missed the buoy in the final and had to turn again, then were helped even further by Kirk's swimming skills when their boat broached and flipped on the way back in.

"This is my second season rowing and that was only the second time we've flipped," Kirk laughed. "I used to be a surf swimmer for Omanu and when we flipped, I figured I might as well try and swim in."
He held off the Waihi Beach runner, with Piha limping home in third.

The revamped national series, which started in Wellington in early December, will build towards a a trans-Tasman test against Australia's best crews at Waihi in February.  The next round is the epic Piha Big Wave Classic on February 2. 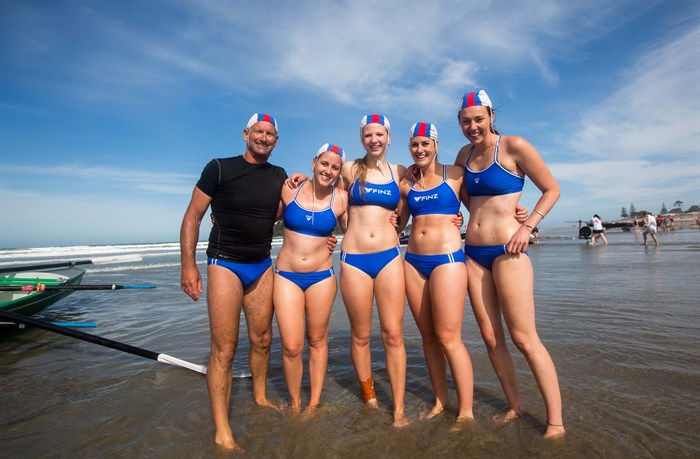 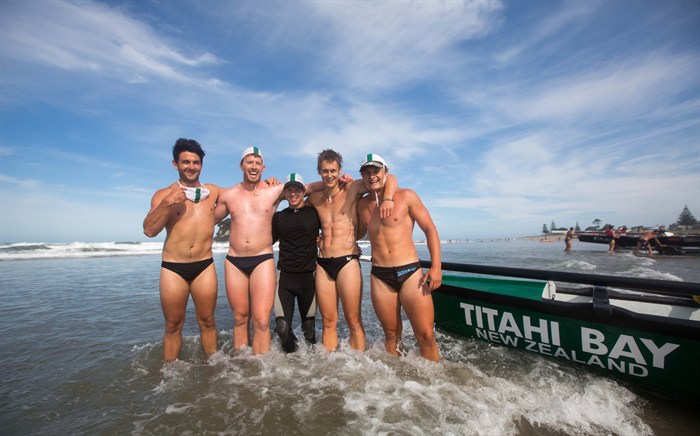