Upsets reigned on the first day of the Eastern Regional surf lifesaving championships, as a tricky swell caused havoc in Whangamata today.

The tone was set in the first race of the day, when 36-year-old Mount Maunganui veteran Damian Munro used every inch of his swimming nous to take out the surf race in the 1.5m, wind-ravaged waves. Munro headed home Midway teenager Cory Taylor, with another Midway athlete Shaun Pahina third.

The biggest upsets were saved for the boat arena, however, where selectors are preparing to name New Zealand representative men's and women's teams after this weekend's racing, to compete against the top Australian crews at Waihi Beach next month.

Omanu caused a boil-over in the women's short-course final, with Sharleen Irwin, Jo Lahmert, Kate Niederer, Leah Scown and sweep Ronald Dobbs heading home Orewa and Mairangi Bay, while the Whangamata men's crew won their final after Orewa broached while leading with the line in sight.

The event is also doubling as the third round of the Sonic Race series and has attracted more than 800 athletes to the Coromandel Peninsula holiday spot.

Racing begins at 8am again tomorrow, with the feature ironman and taplin relays dominating the final day. 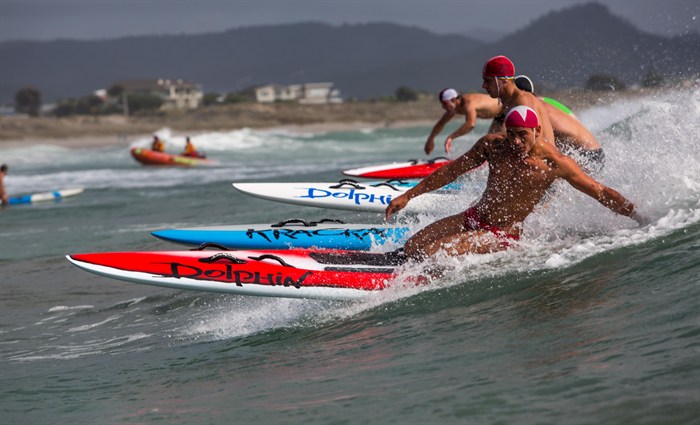 Omanu's Dan Hooker competing in the board race at the Eastern Regional surf lifesaving championships in Whangamata.
Photo by Jamie Troughton/Dscribe Journalism