Titahi Bay heralded a new chapter in one of the fiercest rivalries in New Zealand sport when they handed the Piha surf boat crew a rare defeat on their home beach yesterday.

It's been a tough week for the Kapiti Coast crew, left out of the New Zealand team to face their Australian counterparts in Waihi Beach next week.

That spot instead went to reigning national champions Piha, an experienced outfit swept by Mark Bourneville, who were looking to celebrate their national call-up with victory in the Piha Big Wave Classic.

Someone forgot to tell the young Titahi Bay tyros, however.

"It was pretty much perfect for us today," a jubilant Jono Boyd explained.  "There were great waves but there was also a lot of rowing out to the cans and back which people thought was one of our downfalls - we more than held our own. We've never lacked motivation to beat Piha but it really added to it over the last week and we were determined to work even harder.  That hard work has all been paying off and we're just trying to maintain this level until nationals."

With most of the crew still under-23, Titahi Bay are rebuilding a proud surf boat legacy at the club, which has gathered a cluster of national titles. They can now add a national series title, with the youngsters now claiming wins in two of the first three rounds, with only the Waihi event to come.

As Boyd points out, their comparative youth is relative to how many years they've all been pulling oars.

"People say we're a young crew but we've been rowing together for about seven years.  We're not lacking experience in any conditions and all those years of rowing are paying off.  Rowing together for so long has meant we've got pretty good cohesion in the boat too."

That helped in the dramatic final, with McDowell edging the boat sideways near the end to pull down the winning wave, while Piha slipped off the back.  Red Beach finished a wave back in third, while carnage reigned in the rest of the field as a set came sweeping through.

Elsewhere, however, the home beach advantage definitely proved its worth.

The Piha Pistols continued their remarkable reign with another win in the under-23 ranks - in seven years of racing together, Cedric Bourneville, Ludovik Bourneville, Oliver Sawbridge, Benjamin Richards and Jean-Paul Smit have only lost once through the under-19 and under-23 grades.

Bethells Beach won both the under-21 and under-19 women's divisions, while the strong Tannum Sands crew from Queensland were outstanding in taking out the under-19 men's final.

The final round of the national series is the North Island championships in Waihi Beach next weekend, which will feature the trans-Tasman row-off on the Saturday, followed by the champion of champion race on the Sunday.

Final results from the third round of the national surf boat series, the Piha Big Wave Classic, at Piha today: 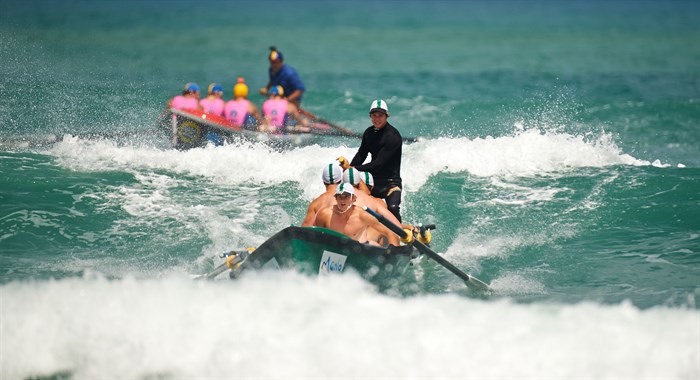