Her left leg heavily strapped, Maia Bryant's final appearance at the Oceans 13 New Zealand under-14 surf lifesaving championships threatened to end in tears.
The 14-year-old grabbed eight medals over four action-packed days on Mount Maunganui's Main Beach but until the final few minutes, only a first-day beach flags title had resulted in gold.
After pulling her hamstring in Friday's beach relay, even the waves seemed to be against Bryant's campaign in her seventh and last appearance at the championships, disastrously colliding with teammate Malia Josephson in the diamond race when both were well in front.
But in storybook fashion, the plucky Bryant played a crucial role in Papamoa's dominating win in the event-ending under-14 grand Cameron Relay, which gave the Bay of Plenty club five points and broke a deadlock with defending champions Red Beach.
"The diamond race was pretty heart-breaking - it was nice to think that we could've got first and second but to fall off together was pretty disappointing," Bryant said.  "Winning overall definitely makes up for it though!"

Papamoa turned up with one of their smallest teams in years - just 30-strong - but a huge final day took them past a tight chasing pack of clubs.  Mitch Cowdrey (under-13), George Mano (under-12) and Kaylie Hansen (under-13) all contributed heavily, with Cowdrey, Bryant, Josephson, Sam Johnston, Aidan Smith and Kate Miller combining for their Cameron Relay thriller.
Other stars included Mairangi Bay's Scott Fairburn, who won four golds in the under-14 boys division, taking home the diamond race, run-swim-run, surf race and the tube rescue with Joshua Brown.
Whakatane's Carla Reid capped an amazing week when she won the under-14 girls board relay, with Ngahuia Muru and Amber Vercoe.  Seven days earlier, the 13-year-old won the Oceania K4 canoe racing title over 500m with an illustrious Eastern Bay crew featuring Olympic champion and former Oceans competitor Lisa Carrington.
Orewa's Lucy Makaea showed astounding all-round talents, wining the under-12 board race, diamond race and beach flags and finishing second in the beach sprint and the run-swim-run.
Her conquerer in the beach sprint had an even better tale, however. Omanu's Ella Pollock journey from agony to ecstasy was completed - after breaking her wrist during Thursday's beach flags competition, Pollock came storming home with cast swinging to edge Makaea, who beat her last year.
"I just pretended the cast wasn't there and it didn't hurt too much while I was running so I decided to keep going," Pollock said.
Mount Maunganui's Libby Bradley won the under-14 beach sprint, board race and diamond race, while teammate Isabella Akroyd won the under-11 board race, diamond race, surf race and run-swim-run as their club finished third, just four points behind Red Beach.
Some of the smaller clubs had their time to shine too - Waihi Beach's Lochlainn O'Connor was a dominant force in the under-12 division, helping his club to a brilliant 10th-place finish. Sumner's Seb Johnson won the under-14 board race, Pukehina's James Puchner won the under-14 beach sprint and Warrington's Devon Familton struck a blow for Dunedin clubs by winning the under-13 surf race. 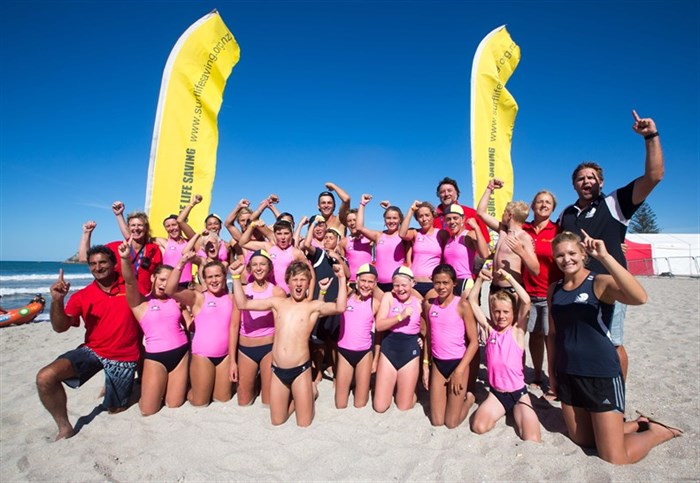