Oceans of surf talent on display

A few short years ago, they were wide-eyed youngsters on the beach staring at their heroes.  Now a group of local surf lifesaving stars will be acting as role models for the next generation at this week's Oceans 13 New Zealand under-14 championships in Mount Maunganui.

Nearly 800 juniors will hit the warm waters of the Main Beach in the four-day carnival, coming from 40 clubs around the country.

And for the second year in a row, the event will double as the finale of the Sonic Surf Race series, pitting some of New Zealand's best senior talent against each other in three ironman eliminator races on Friday and Saturday.

Local stars like Papamoa's Natalie Peat and Ben Johnston, Omanu's Ben Cochrane and Mount Maunganui's Katie Wilson and Jess Miller all came through the Oceans ranks and now get a chance to battle for Sonic series glory.

"It will be cool to race in front of the kids and show them how far you can get in just a few years with hard training," 16-year-old Cochrane, who is also a Sonic team rider, said.  "I remember last year watching Cory Taylor take out the Sonic final at Oceans and he motivated me to try make the final this year. The goal for the weekend is to make it to the top-seven race off and if I finish in the top-four, I'll be stoked."

Cochrane finished fourth in the open ironman at the Eastern Regional round of the series and second in Oakura, the same round where Wilson broke through for her debut open ironwoman victory.

Now 17, Wilson has made huge strides this season under the expert tutelage of Mount coach John Bryant.

"It will be weird at Oceans because I can look at the kids racing and think 'hey, that was me three years ago' and it's hard to believe I've come so far in three years," Wilson admitted.  "Hopefully that means I've still got lots of improvement to come as well. I definitely miss racing at Oceans but I'm also really glad I can still be there to support - and maybe inspire -  my sister while she is racing this week."

Wilson only won a solitary Oceans title, the 2009 board race crown, which is in stark contrast to Peat, who dominated the ranks from 2005-2009, winning the surf race in every agegroup and picking up several Diamond Lady titles. She's seamlessly transferred that pedigree into the senior ranks and, as an 18-year-old, has been one of the most consistent open woman athletes in New Zealand all season.

"I loved racing at Oceans as a nipper and I'm looking forward to heading back to race in the sonic series final," Peat said. "The athletes racing at Oceans are the future of our sport so it's awesome for them to be able to watch our racing and pick up some tips for when they progress through to ironmen and ironwomen. The reality is that most of the females racing in the Sonic series were racing at Oceans three or four years ago so it's pretty exciting for the young athletes to be able to see how close these opportunities are for them."

And it's not just the Sonic series stars who are giving back to the event - many of the volunteers this week are past Oceans competitors.

Auckland's Red Beach go in as the defending champions and have assembled a 62-strong squad to defend their title this week.  Hosts Mount Maunganui have the next biggest contingent, with 53, followed by Omanu's 50. 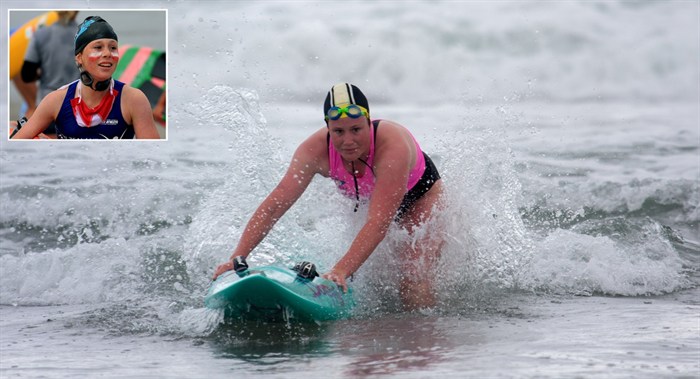 Papamoa surf lifesaver Natalie Peat will compete in this week's Sonic Race Series finals in Mount Maunganui, while (inset) Peat at the 2009 Oceans under-14 championships. Photo by Jamie Troughton/Dscribe Journalism 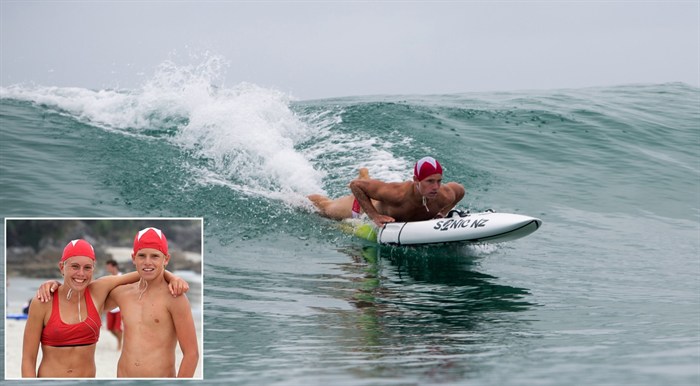