The Gisborne 20-year-old had an unsteady debut in his first season as an open competitor last year, struggling with the step-up after a stellar junior career.

Determined to turn things around, he shifted to the Gold Coast in June and has spent the last six months training with Australia's best.  That wortk ethic paid off in style today, powering away over the stunning 25km course today and heading off New Zealand ironman champion Max Beattie by nearly 5mins to win the $2500 first prize.

"I had a good talk with the New Zealand selectors at the end of last year and they told me I wasn't consistent enough and they were right," Taylor said. "I made sure I put in some hard training and came back this season looking for some results.  I didn't know how such a long race was going to turn out but I felt good at the end which was pretty pleasing."

Taylor finished the Steve Bird Wines-sponsored event in 2hrs 21mins 22secs, with Beattie clocking 2:26.21 and Australian Jackson Maynard third in 2:27.20, with the Currumbin club member giving Taylor and Beattie too much head-start on the opening 5km soft-sand run.

The event featured a 10m leap off rocks on Moturiki Island and subsequent swim leg, a 12km ski paddle and a 6km board paddle.

Taylor has been a New Zealand junior kayaking representative and his prowess was evident, inching away from Beattie on the long haul down the coast to Omanu and back, then holding him off on the board.

"I jumped onto the ski and the weed gave me a bit of hassle - I had to stop and take it off - but Cory was already ahead," Beattie said.  "If you give Cory Taylor any room, you're going to pay for it."

While Taylor opened up daylight in the men's race, the women's race turned into a thriller, with Mairangi Bay's Danielle McKenzie needing a sprint to hold off Mount Maunganui local Katie Wilson.

The 19-year-old McKenzie mastered the tricky shorebreak better, finishing in 2:41.29, just 3secs in front of Wilson, with another Mount athlete Jess Miller third in 2:47.56.

Having just got back from the five-week stint at the Northcliffe club on the Gold Coast, McKenzie credited her attention to detail as making the difference.

"I was training with seven or eight of the best ironwoman in the world and I learned so much - you make one mistake and you're out the back but if you have a good transition, you're up there with them," McKenzie said.  "I've been practicing my get-offs for weeks and it paid off at the end."

Maynard, meanwhile, was hugely impressed with the future of the event, which showcased the best parts of the Bay of Plenty coast.  The Australian raced the iconic Coolangatta Gold event as a junior and reckons the comparisons are extremely favorable.

"Mount Maunganui is Currumbin's sister club and a few of the boys were thinking about coming over," Maynard, who was third in the Australian ironman championships earlier in the year, said. "I guess I was the guinea pig this year but once I get home and tell them about it, I'm sure they'll be very interested. It's got the opportunity to be a premier race, just like the Coolangatta Gold, and hopefully a few Aussies come over and take it on." 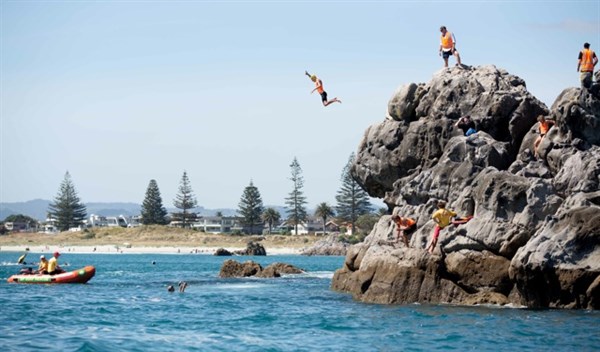 Competitors leap off the blowhole on Moturiki Island near Mount Maunganui for the swim leg of the Mount Monster.
Photo by Jamie Troughton/Dscribe Media Services 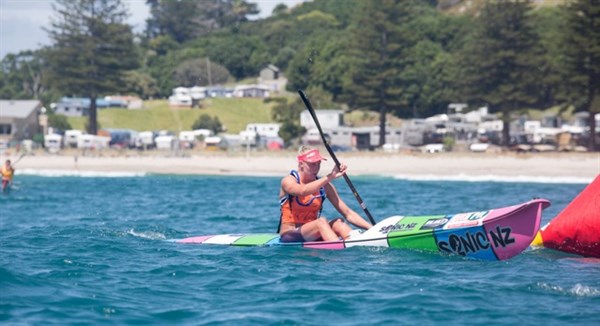 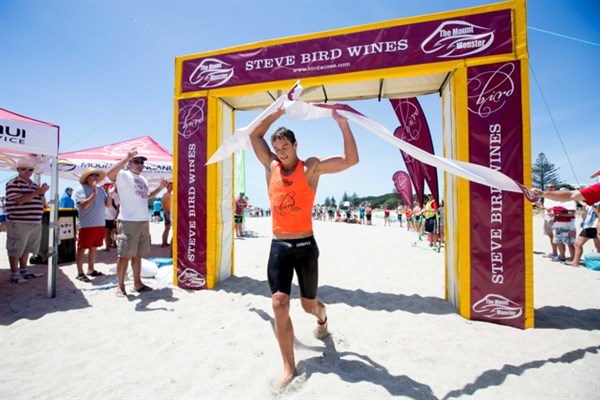