Champion Mount Maunganui surfer Matt Hewitt has gone back to where it all began in a bid to boost his 2014 season on the world stage.

The 22-year-old professional, who is ranked in the top-150 surfers on the globe, entered his first senior surf lifesaving carnival recently and came away with some surprising results.

"It's always good to put yourself up against top athletes to see how your fitness, skills and mental approach compares but I must admit I was a bit surprised with my sprinting results," Hewitt laughed.  "I've always been reasonably quick off the mark but usually my short legs find it hard to keep that pace going."

Surf lifesaving featured in Hewitt's formative years, before the lure of wave-riding drew him away, with Hewitt competing for Mount Maunganui at the national under-14 championships a decade ago.  Mount coach John 'Spindles' Bryant has kept in touch over the years and Hewitt has joined in squad training occasionally, when his hectic schedule on the WQS Tour allows.

"It's pretty cool to be able to train down with the team at the Mount and I find cross training is a key with my fitness.  Being able to train on the ocean and having a varied training schedule makes it that much more enjoyable, plus everyone down at the Mount club is so friendly."

Bryant is certain that the benefits go both ways for his national championship-winning squad.

"Matt has trained with us over the years and finds the board work in particular good for his paddling fitness but we're delighted to have him involved," Bryant said. "It's great for the squad to see his professionalism and the way he prepares himself, both on and off the beach."

Making Hewitt's surf lifesaving deeds more impressive was the fact he'd just got back from his last surfing event of the year, finishing fifth at the Taiwan Open, which consolidated his ranking of 140 in the world.

He's hoping to crack the top-100 in the coming year, which will get him into more of the big events, beginning his 2014 season with the New Zealand nationals in Gisborne next month where he wants to regain his national men's title.

As for a future surf lifesaving career?  That might have to fit around his short-board riding.

"If the timing worked out and I could help out Spindles, I'd love to have a crack at another surf lifesaving carnival - but maybe next time I wouldn't do so many events.  I came away pretty shattered the other day!" 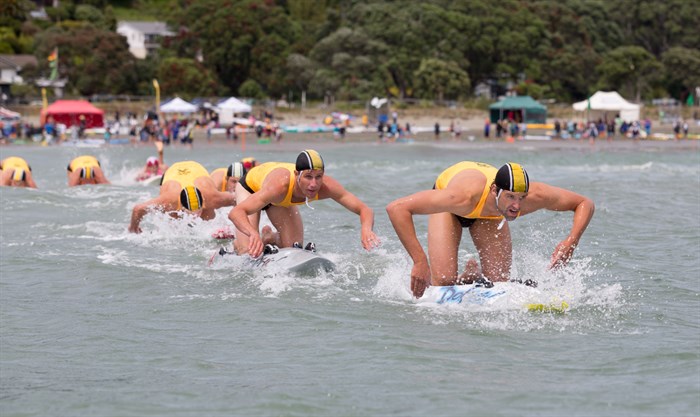