A frustrating season of surf boat rowing is set to explode into action in Thursday's Whangamata Surf Boat Spectacular.

The annual carnival doubles as the second round of the national series and nearly 60 crews are expected to descend on the Coromandel holiday spot.

Adding further spice to the mix, New Zealand selectors will use the event to pick male and female crews to compete against the best boats in Australia in February's ASRL Open in Stockton, New South Wales.

After the first round of the series in Paekakariki was cancelled due to a Kapiti Coast weather bomb, selectors have even organised a trial preceding competition on Thursday, hoping to paint a clearer picture of the form crews.

"There are a whole lot of variables in surf, especially if there's a little bit of a wave, so we're not just restricting our selections to a one-off unless it's really clear-cut and decisive," selector Geoff Hogan explained. "If things aren't clear-cut in the trial, we'll look at performances during the rest of the day's racing."

With last year's national representatives Mairangi Bay retiring, the women's selection is a lottery, with Red Beach, Piha and Omanu all having legitimate claims in front of Hogan and fellow selectors Shane Radovanovich and Craig Dillon. 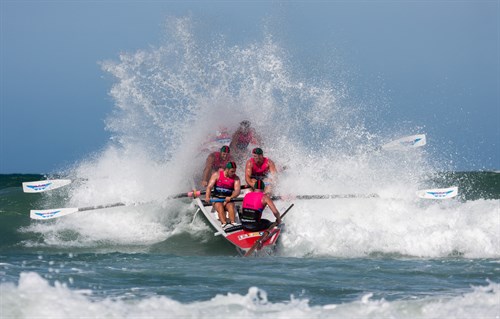