Almost four years on, the three words, "stay with me" still ring as clear in Phil O'Connor's mind as the day he lay motionless on Pauanui beach as lifeguards hovered over him, working to save his life.

Recently hearing about his rescue struck such a cord with Surf Life Saving ambassador, Pauanui club member and singer/songwriter Jamie McDell that she has written a song about it entitled 'Saving.'

Jamie says her best friend Martine Smith, who is the Pauanui Club Captain, told her about the rescue when it happened and then recently, Martine happened to be visiting Dunedin for a few days when, by pure chance, she ran into Phil's son Joe who is studying there.

Nearly four years on, they still recognised each other from that frightful day on the beach.

Jamie says Joe was so appreciative and grateful to the lifeguards for giving his dad a second chance. "I've been around lifeguards for a while now but I think that's when it really hit me, the importance of what we're here to do- save lives. As I do with most things that I connect to strongly, I wrote a song about it," she says.

'Saving' is now available in celebration of the launch of Surf Life Saving's Summer Appeal which began on Friday (December 6, 2013) and runs through until February 2, 2014.

Surf Life Saving New Zealand is the charity dedicated to protecting our community in the water. This season around 4,000 volunteer lifeguards will spend over 200,000 hours keeping a watchful eye on over 80 beaches throughout the country, helping to make them a safer place for Kiwis and their families to enjoy their summer.

During an average season, over 1,200 people are rescued from life-threatening situations. Last year that number was over 1,600. A donation to Surf Life Saving will make sure our lifeguards are on patrol with the right equipment to save lives this summer.

Phil, an Auckland father of six boys, says he owes his life to the surf lifeguards on patrol that day- January 21, 2010. He was one of nearly 1,500 people rescued that season.

It was the last day of his family's holiday when a body surf went wrong and he came in head first on a rogue wave, hitting a sand bar. He suffered a brain injury along with a spinal cord contusion.

"I crashed head first into the seafloor with what felt like a truck on my back. An incredible burst of pain exploded at the back of my neck as at the same time, a high decibel electrical siren began screaming in my head. Coming to, I remember floating about 30cm under the water, face down," he says.

Mr O'Connor says he realised he needed to raise his hand to alert lifeguards but he couldn't move. "I held my breath for as long as I could and then thought, I'm going to die. I saw a wall of black and then I passed out," he says.

A friend that was swimming close by pulled Phil above the water as lifeguards rushed to meet them, pulling Phil onto the beach.

When Mr O'Connor came to, he says he could hear people talking around him and after what felt like a really long time, he realised it was lifeguards. "The head lifeguard was delivering instructions like calling for oxygen and I realised, I must be in trouble," he says.

Mr O'Connor says he was in so much pain and it was so hard to focus that he started to drift out of consciousness. But hearing the patrol captain Matt Williams say "stay with me;" kept me going, he says. "That's what they say to people on TV when they're dying so I thought I'd better listen. That was the best thing he could have said to me otherwise I would have sunk back to the blackness that I had woken up from. That had a huge effect on me. It was crucial," he says.

Phil's wife Janice says "thank you" can't sum up what the lifeguards did for her family that day. She wasn't at the beach at the time and one of her sons raced back to their bach to get her. "I raced down the soft sand and it was as if my feet couldn't get there fast enough," she says.

A young female lifeguard stopped her from flying in panicked as she couldn't convey her fear to Phil, she says. "As I saw Phil lying there on the sand with the lifeguards calling "stay with me" I realised the enormity of it. I thought, this is bad," she says.

Patrol Captain Matt Williams says he still remembers the incident very clearly today. He and fellow lifeguards responded with oxygen, a defibrillator and a back board. After establishing that Phil was breathing, Matt administered oxygen and applied a neck brace.

At this time a volunteer lifeguard, who is also an orthopaedic surgeon, arrived on the scene and she confirmed he was displaying symptoms of a spinal injury. The lifeguards called for the Westpac Rescue Helicopter and monitored him until it arrived.

He was flown to Auckland Hospital where he remained for two weeks.

Joe, now 21, was the oldest brother on the beach at the time. He says Matt called him to hold his dad's hand and to keep reassuring him that everything was ok as he drifted in and out of consciousness.

Joe says he doesn't believe his father would be alive if it wasn't for the lifeguards that day. "It's funny because we wouldn't always swim between the flags as our bach is down the other end of the beach but it was lucky that we did that day."

Joe says his father was blue in the face and had cuts on him. His jaw was locked so he couldn't speak. "If it wasn't for the lifeguards taking control of the situation and knowing what to do, it would have been a completely different story, he says.

The quick spotting of Phil by lifeguards on duty and the rapid stabilisation of Phil's neck contributed to his on-going recovery.

Mrs O'Connor says people take it for granted that lifeguards will always be there watching. "The sheer efficiency and composure the lifeguards displayed was amazing. We're eternally grateful for what they did that day," she says.

To find out more about the Surf Life Saving Summer Appeal, visit http://slsnz-appeal.org.nz/ 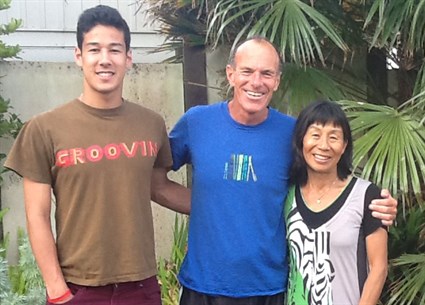