Australian ironman Jackson Maynard added some international class to the Whangamata Classic surf lifesaving carnival yesterday, though the 22-year-old didn't have things all his own way.

Maynard, who finished third in the Australian ironman championships earlier this year, headed across the ditch to compete at Whangamata and in next weekend's inaugural Mount Monster long-distance event. He showed his all-round skills by winning the open men's surf race at the annual Coromandel carnival and grabbed third-placings in both the ski race and board race finals.

But he was shut out of the medals in the ironman, after a remarkable surge from Mount Maunganui's Andrew Newton, who outsprinted Whangamata local Bjorn Battaerd after a phenomenal final board leg.

The 27-year-old Newton has a rich pedigree on the board and ski but has steadily built on his swimming in recent legs.  He also took advantage of a friendly sandbank in the opening swim leg yesterday, allowing him to keep pace with the early leaders, though he still had plenty of work to do over the ski and board legs.

"I saw a wave coming as I came around the cans on the board and knew I had to pull down it," Newton said. "When we all hit the beach together, it was all about who still had the legs - I'm pretty happy with that finish!"

It wasn't long until his rivals had their revenge, however - Newton had a decent lead in the board race final until a wave brought half a dozen other competitors through.

Orewa's Jack Wilson caused another upset in the ski race final, although the 20-year-old is a nationally-ranked kayaker.  He held off Beattie and Maynard for the win, with other notable paddlers like Travis Mitchell (Mairangi Bay) and Steve Ferguson (Piha) out of the top-three.

Four-time Olympian Ferguson did pick up second in the surf race, however, and grabbed an impressive fifth in the ironman after the best part of a year on the sidelines.

Even more impressive was Paekakariki paddler Kayla Imrie, who dominated a class field to win the women's ski race.  Imrie was too strong for another cross-over kayaker, Fitzroy's Rebecca Cole, with Piha's Brita Camplin third.

Camplin also finished third in the board race and second in the ironwoman, behind Papamoa's Natalie Peat, while Peat was second in the surf race behind Mount Maunganui's Jess Miller.

Gisborne schoolgirl Jasmine Smith won the board race, going one better than her breakthrough silver at the same event last year, while the 17-year-old also took home the under-19 title.
Smith's prowess on a board isn't just in the surf lifesaving sphere either - she's the reigning under-18 girls' national surfing champion and finished fifth at the ISA world junior surfing championships in Nicaragua earlier this year.

Organisers were delighted with the turnout in Whangamata, with more than 550 athletes from 21 clubs attending the carnival, jointly hosted by Surf Life Saving Northern Region and SLSNZ Eastern Region.
Red Beach's prowess in the boat and canoe arenas helped them claim the overall points total, finishing two clear of Mount Maunganui, with Papamoa third.

See a gallery of images on the SLSNZ Facebook page here. 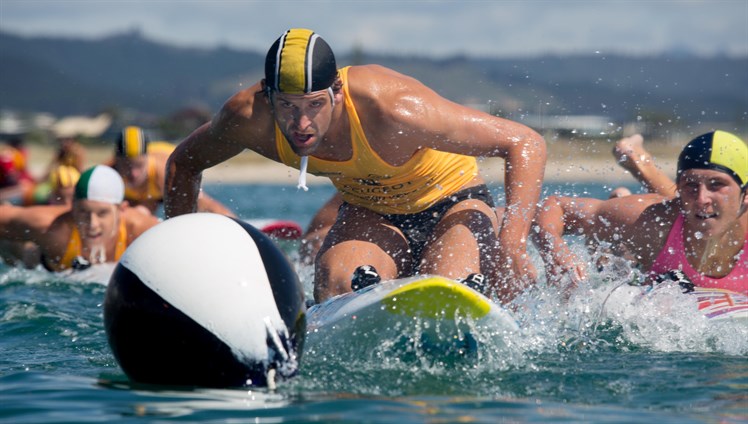