The Bay of Plenty club is the venue for this weekend's North Island championships in the inflatable rescue craft, with nearly 50 crews coming from 19 clubs around the country.

Leading the charge with eight crews - including two premier combinations and an all-new women's crew - are the hosts, where former Gisborne IRB gun Justin Martin has injected new life into the club's petrol-head ranks.

"I demand a lot of the guys and I work them pretty hard but they keep turning up - each year we get a few more crews, so I suppose they must enjoy it!" Martin laughed.

"One of the main things we've done was getting the gear up to scratch - as well as getting the crews racing faster, it also means the boats and engines are in far better condition for patrolling, when having a reliable and tested IRB can suddenly become a matter of life and death."

Martin linked with the club three years ago, back when Troy Walsh and Mitch Brady were the only two racing for Papamoa.  They've since graduated into the premier division, with seven other pairings joining them this weekend.

Among them are fellow premier crew Tomee Berthelsen and Liam Smith, as well Meg Fisher and Alex Baskin in the women's division.

While the racing will be fast and furious, there's a serious side to the competition, with IRBs a vital part of a surf club's armory when it comes to performing rescues in rough seas.

"IRBs are a crucial part of our patrolling service, especially with such a long stretch of coastline to monitor, and the racing is a great way to get crews used to handing the boats in all conditions," Papamoa's powercraft officer Shane Smith explained. "During a rescue, every second counts and the faster our lifeguards can get off the beach and get to a patient, the greater the chance of survival. Justin has been an integral part of building the IRB culture in the club since he arrived and he sets pretty high standards - we see a fair few push-ups when things don't go right - but we want our lifeguards as prepared as possible."

The championships will feature eight premier crews - including two from the champion East End club in Taranaki - and healthy numbers in the senior (16) and under-21 (18) divisions.  The women's division also includes top New Zealand ironwoman Maddie Boon, who will crew for driver Katherine Reardon in a Muriwai boat. It's Boon's first season in an IRB, after the former New Zealand board race and run-swim-run champion decided she needed a new focus this season.

"I seem to be working all day at the moment and studying all night so it's been quite nice to get to Saturday afternoon and go crazy out in a boat," Boon said.  "I'm studying to be a Chartered Accountant and just needed to do something different - the training for IRB isn't as time-consuming as ironwoman training, plus I've been having a whole lot of fun doing it too."

Saturday's racing starts at 10am with titles decided in tube rescue, mass rescue and the open team's race, while Sunday's programme has the assembly rescue and the single rescue. 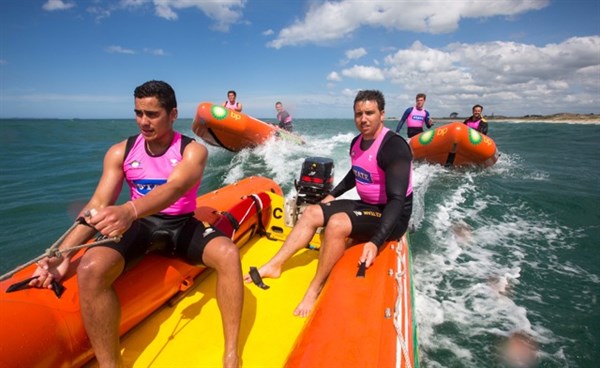