You wouldn't expect a four-time Olympian and world champion surf lifesaver to be scared of much but the prospect of 5km on a kneeboard has Steve Ferguson decidedly nervous.

The 33-year-old will line up in Saturday's inaugural Mount Monster - a long distance surf lifesaving event billed as Mount Maunganui's answer to the Coolangatta Gold.

It's got 25km of running, swimming, ski paddling and even a signature 10m jump off rocks into the water near the Moturiki Island blowhole, although it's the relatively innocuous final board leg that has Ferguson sweating.

"The 5km run should be sweet but I am dreading the board leg," Ferguson said.  "I've got toothpicks-stuck-into-an-orange for legs and if they don't snap halfway through the board leg, it will be a miracle."

It's been a relaxing year for Ferguson, after 2012's twin highs of the London Olympics and New Zealand's win in the world surf lifesaving championships.  For the first time in 33 years, he kicked back.

"I've been involved in sport pretty much since I was born and had my first-ever year off this year, which was really nice but I missed training and being fit.  Multisport racing definitely interests me but I'm trying to make the surf lifesaving thing go as long as I can and this race really appealed - although it did take me about 20mins to click 'enter' on the computer and commit to doing it!"

That appeal is shared - more than 130 athletes, including 53 individuals, will line up at 10am tomorrow on Mount Maunganui's Main Beach for the event, which is sponsored by Steve Bird Wines and Vineyards.

Among them will be reigning New Zealand ironman champion Max Beattie, rising Gisborne star Cory Taylor and Australian Jackson Maynard, who was third in the his country's national ironman titles earlier this year.

Mount Maunganui's Andrew Newton goes in with form, having snatched a dramatic win in the ironman at last week's Whangamata Classic, while clubmates Sam Shergold and Hamish Treanor both completed October's Coolangatta Gold and finished in the top-25.

Mount club coach John Bryant came up with the Monster concept, having used it as a training tool for his squad over the years, although it also has a serious purpose.

"The blowhole jump isn't just a test of nerves, it's a valuable training tool for our lifeguards," Bryant said.  "We've had a number of rescues around the rocks at the end of Moturiki Island over the years and our lifeguards need to know how to safely negotiate entering and exiting the water."

Tomorrow's racing starts at 10am. 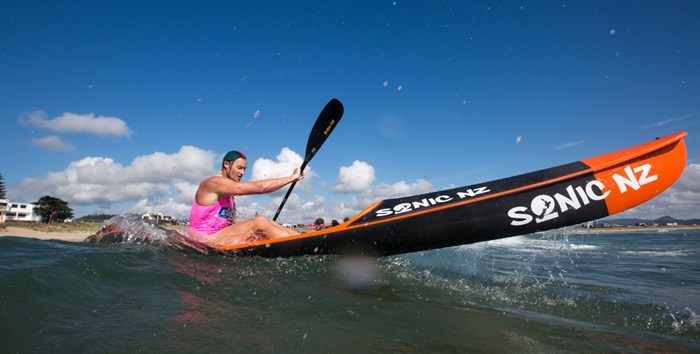