After criss-crossing the Tasman this week, Max Beattie made short work of a small slice of Pacific Ocean as the New Zealand ironman champion collected another piece of prestigious silverware.

The New World Mount Maunganui-sponsored Classic was postponed until early evening after a fierce storm hit the upper North Island.  Beattie - after competing at the Whangamata Classic and Mount Monster on consecutive weekends - made a whistle-stop trip back to Queensland for Christmas and his 22nd birthday.

But despite the hectic schedule, his rivals couldn't get near him as he won the long-distance ironman, with Whangamata Classic ironman winner Andrew Newton (Mount Maunganui) second some distance back.

"I've had a couple of shockers over the last few weeks and wanted to come out and stamp a bit of authority a little bit," Beattie said.  "I was hoping to get a lead from the start and do a mistake-free race and managed to pick all the right waves out and got a couple of lucky swim waves."

Beattie was third in Whangamata and second at the inaugural Mount Monster behind Cory Taylor, who was a casualty of today's weather and couldn't make it through from Gisborne in time.

It was left to Beattie to provide a masterclass, destroying the field on the opening swim leg and easing home on the ski and board, to become the first successive winner of the Ian Porteous Memorial since Aaron Jarman in 1995-96.  Porteous was a popular Omanu club member who died in 1995, aged  44, the day before the club's annual long-distance ironman race.

"There's a lot of people around the club who are passionate about this event and it means a lot to be able to keep the trophy in the club and repay them in a small way," Beattie said. "The club can't do enough for me - they're all so supportive - and coming back and racing here is the least I can do for them."

Another Omanu clubby, Ben Cochrane, won the under-19 division and finished third overall.

The women's title went to Mount Maunganui's Katie Wilson, who exacted some revenge of her own after being out-sprinted by Mairangi Bay's Danielle McKenzie in the Mount Monster last week.

Wilson left nothing to chance this week, taking the lead from clubmate Jess Miller on the ski leg and holding McKenzie at bay over the final board leg.

"The waves made a big difference - I really like this kind of chop," Wilson said. "This rivalry between Danielle and Jess and I is also helping all of us achieve our best.  We seem to be swapping wins all the time and a bit of revenge did cross my mind as I went across the line this week!"

Proving Wilson's point, Miller was too strong in the surf race earlier in the carnival, while McKenzie won both the ski and board races.

Ashley Cochrane took out the under-19 ironwoman, coming back superbly in the ski and board legs, heading off young Papamoa athlete Maia Bryant and Red Beach's Hannah Williams, who are both still under-16.

Beattie, meanwhile, also grabbed the surf race title and finished behind Newton in the board race, while the Mount Maunganui star also finished second in the ski race, sandwiched between New Zealand kayakers Scott Bicknell (first) and Andrew Roy (third). 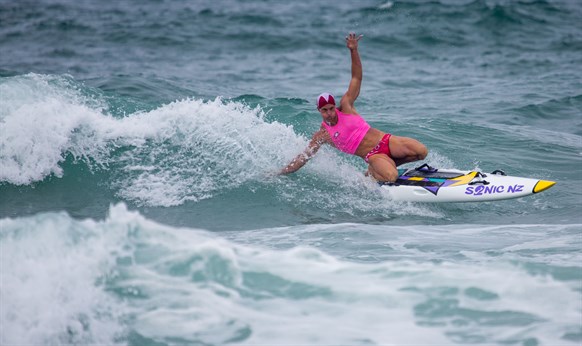 Oceans 21 Celebrates its “Coming of Age”