It wasn't ideal world championship preparation but Bay of Plenty surf lifeguards kicked off their season in style at Omanu Beach today.

Challenging 2m surf proved the perfect opener for the first round of the Spring Series, with nearly 50 competitors showing up to compete in ski and board races.

Among those racing were Papamoa's Ben Johnston and Natalie Peat and Mount Maunganui's Sam Shergold, who are all competing for the New Zealand under-20 team at the Rescue 2012 world championships in Adelaide in November.

"This was definitely a lot different to what we're going to find at worlds, where it's a flat-water beach, but it was still great fun and good to have some quality racing," Peat said.

Her Papamoa team will also be sending a big team to this week's State NZ Pool Champs in Wellington, with Peat and Johnston shouldering a big workload as they look to defend their overall club title.

"It's been pretty full-on, having to fit in both the beach and the pool training, but it's just a matter of finding that balance," Peat said.

Peat had a good tussle in the women's division with Mount Maunganui's Arna Wright, while Papamoa 16-year-old Danny Hart had a great great day out in the board racing.

He won two of the three races, with Shergold grabbing the other win.

Series organiser and national kayaking star Scott Bicknell won all three ski races in the big swells, getting out cleanly and showing great surf skills to hold his craft upright coming in.

He was delighted with the conditions, given surf lifesaving patrols start in less than three weeks.

"These competitors showed how fit and skillful they are out there and they'll all be patrolling our local beaches over summer, which has got to be pretty comforting for the wider public," Bicknell said.  "It was the perfect start to the Spring Series and hopefully we'll continue to attract good numbers."

The next event in the series will be at Labour Weekend at Mount Maunganui's Main Beach, with Tay St Beach hosting the last round in November. 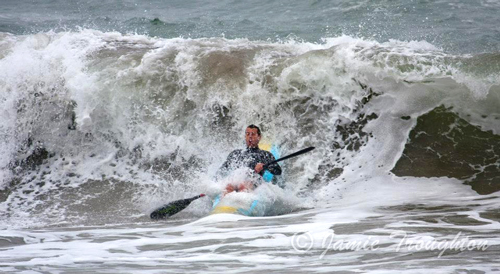