Brothers Andy and Steve Kent made this year's State New Zealand Pool Champs a family affair by competing together with their cousins Danny and Martyn McDowell.

As the single largest pool competition in the country and the national champs for pool rescue events it featured events ranging from manikin carries and obstacles to line throw and rescue medleys.

The four boys came in fifth in the Open Men's 4x25 metre Manikin Relay, which was won by Piha.

Steve represented New Zealand at the London Olympics and is part of the New Zealand team taking on the Aussies at the World Championships in Adelaide next month.

Brothers Martyn and Danny also raced in the Open men's 100m manikin tow with Martyn coming 9th and Danny coming in 11th.  Together they came 9th in the 2x50 metre line throw relay.

Andy says there is always a bit of friendly competition between them. Surf life saving has been in the family for years. His cousin on the other side of the family, Kevin Morrison, is also in the New Zealand team heading to the World Lifesaving Champs in November with Steve.

He says it's great fun competing with family and they often have friendly banter between them. "Whenever there are surf carnivals it's like a family reunion. We always enjoy it," he says.

Now in its 10th year, the competition has gone from strength to strength and has the reputation of close exciting racing.

Surf Life Saving New Zealand is excited to see the continual growth and interest in the Pool Championships at both a National and Regional level.

Surf Life Saving New Zealand Event Manager Scott Roberts says the pool champs is a good, fun event with a great dynamic which is why people continue to come each year. "It's the first national event of the season and it's a perfect way to kick it off," he says.

The State New Zealand Pool Championships was held at the Wellington Regional Aquatic Centre in Kilbirnie from October 5-7.

Visit sport.surflifesaving.org.nz/nzpoolchamps for more information and a full list of results. 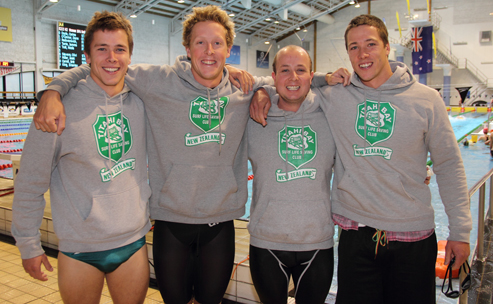