A piece of the ONE Banner is coming to your area

A chance to be part of the ONE Team is coming your way. Rescue 2012 is 25 days away and we would like the entire movement to be right behind our teams at Rescue 2012, the Life Saving World Championships in Adelaide next month.

We have created two massive "ONE Team" banners and cut them into four pieces. Over the next three weeks the banners will be in an area near you and we would like to give you the opportunity to be part of our ONE Team and show your support by signing the banner.

We had two pieces signed at the State New Zealand Pool Championships and it was a great success.
Follow the Facebook page www.facebook.com/slsnzhp to find out where they banners are going to be or view the dates below that are already available.

ONE Road: The Story so far…

At the 2010 Life Saving World Championships in Egypt New Zealand finished second to Australia by a heart-breaking narrow margin. Our quest to become World Champions in 2012 started in November 2010.

In May 2011 the two Surf Life Saving New Zealand High Performance Squads came together for one camp to start on the road to Adelaide together. At this camp our ONE team was created to capture the essence of our goal - ONE TEAM, ONE ROAD, ONE GOAL

18 months later we are in our last month of preparations for the 2012 Life Saving World Championships in Adelaide, 7-11 November, and we want

Show your support - sign the ONE banner and wish our teams all the best in their quest to be World Champions!- Please leave room for everyone.

Days when you can sign a piece of the banner in your area:

Yet to be confirmed.

Yet to be confirmed.

The banner is Currently in the Christchurch office (1025 Ferry Road). Drop by, check out our new ground floor office and sign the banner! It will be at the first race on the Christchurch calendar, Preseason #1, New Brighton, 28th October.

It heads to Dunedin on Sunday (14th) and will be with Steph in her office at the new Sport Otago building. It will also be at the White Island Race, St Clair, 20th October. 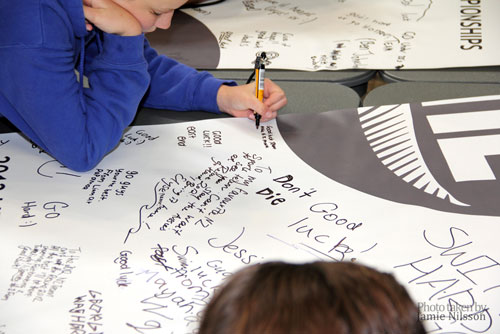 Pieces of the ONE banner at the State New Zealand Pool Championships. 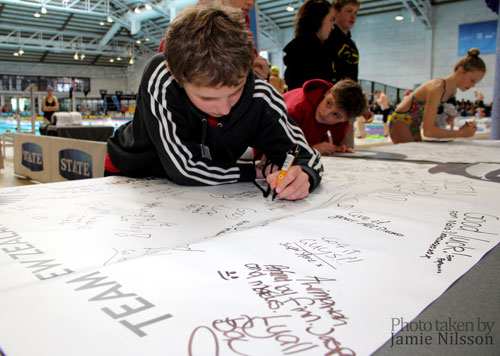