Carrington to race at Worlds

Olympic kayaking champion Lisa Carrington will make her competitive comeback next month, back in the sport where she first started.

The 23-year-old will compete for her Mount Maunganui club at Rescue 2012, the surf lifesaving world championships in Adelaide from November 8-18. It will be her first outing since winning gold in the K1 200m in London.

"The worlds have been in my mind since earlier in the year, giving me something else to aim for and to get excited about," Carrington explained. "Because surf isn't my main sport now, there's a bit less pressure and it's also about getting back to basics and remembering why I started paddling, so I can keep motivated."

Carrington, the 2011 national ski race champion, will go head-to-head at the interclub world championships with Australian Olympians Naomi Flood and Hannah Davis.  Flood is a former world champion ski paddler and illustrious ironwoman in her own right.

"Having an Olympic champion is obviously a huge boost to the team but to be honest, she'd be a boost to us anyway because she gets on so well with all the other girls and they'll all be just bouncing off each other," Mount Maunganui coach John Bryant said.

Carrington has a long history in surf lifesaving, having joined the Whakatane Surf Club when she was eight and starting ski paddling when she was 14.

She took up kayaking two years later to bolster her summer sport and didn't look back.

Carrington isn't the only New Zealand Olympian competing in Adelaide.  Swimmers Andy McMillan, Steve Kent and Natasha Hind will be racing in the national teams championship for New Zealand, joined in the 12-strong squad by another kayaker, Steve Ferguson.

Four-time Olympian Ferguson believes Carrington's move back to surf will help prolong her paddling career; after all, it's worked for him.

"After the Sydney Olympics, I was mentally drained," four-time Olympian Steven Ferguson admits.  "I'd trained so hard for so many years and I didn't do as well as I wanted and I was on a big downer.  I decided to make some life changes and do things that made me happy and surf lifesaving was one of them."

The 32-year-old was delighted to have something else to focus on after the highs of London, where he and Darryl Fitzgerald finished seventh in the K2 1000m.

"For me, it's quite exciting - I'm getting straight back into it and changing my focus to a world championship with a great team environment. I feel like nothing's changed and I've carried my momentum through the Olympics to now."

Carrington had six weeks off training after London but has been back on the water for the last month.  She's hoping the temporary move back into surf will help sustain her through to the Rio de Janeiro Olympics in 2016.

"I've never been able to do anything internationally with surf lifesaving and it should be a lot of fun." 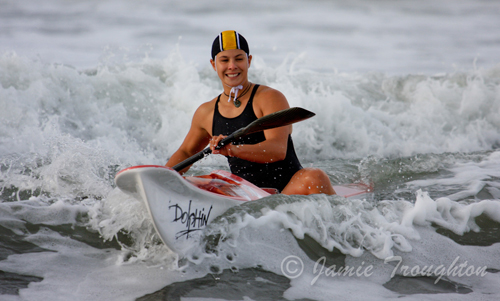