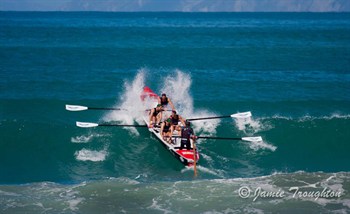 They vanquished all their Kiwi rivals last season and nearly conquered the world but don't expect the champion Piha men's surf boat crew to let their standards slip.

The revamped national series gets underway on Saturday with the Wellington Super Surf Boat carnival at Paekakariki. At stake in the series are two spots - open male and open female - to compete in a trans-Tasman test against Australia's best crews at Waihi in February.

Piha are sending six crews south to compete across four divisions this weekend, with their top two open men's crews - swept by Mark Bourneville and Shane O'Halloran - among the warm favourites.

"It's great to see clubs like Lyall Bay getting themselves back into the fold and Titahi Bay used to provide a lot of the motivation that drove me so relentlessly to knock the buggers over," former Kiwis league player Bourneville said.

"It took us many years of building and planning to knock the likes of Titahi Bay off the top of the castle and we don't intend to give the space up any time soon."

Bourneville's crew has got the form to back up those claims, having just returned from the Rescue 2012 world interclub championships, where the club finished second overall.

But his wariness at the Titahi Bay revival is well justified.  The perennial surf boat powerhouses have been rebuilding over the last two seasons and a largely under-23 crew, swept by Wil McDowell, are making a permanent move into the open ranks this season.

"We've got a whole lot of junior girls coming through and three male crews, which is the most for a few years," McDowell said. "We've had guys like (former champion sweep) Paul McVicar helping out and Tim Marsden has been setting our programs, which has given us a big boost.

"Piha will be right up there with the best and they're coming off some good form at the worlds but knocking them off is always one of our goals for the season and we'll definitely be going for it."

Lyall Bay grabbed second in the short course at nationals earlier this year, though they've had a disrupted off-season with crew changes.

"It's been a big incentive throughout winter and it will be lurking in the back of our minds but Piha are a long way ahead of the rest of the country," Lawson said. "They're got a really good program going up there but we're pretty keen to give it a crack."

The women's division may be given a shake-up this year, with the outstanding national champion Mairangi Bay crew without key rower Nina Reid this season.

That could open the door for Red Beach, who took out the minor placings in the long-course at nationals, with Mount Maunganui also expected to feature.

Waihi Beach's indefatigable 74-year-old Dan Harris will enter his 60th season of surf lifesaving competition when he sweeps his national champion under-19 crew for another year, while he'll also control an under-23 crew.

Blenheim's Rarangi club will cross Cook Strait as the only club with a crew in all six divisions.