Kiwis on top of the world

The New Zealand surf lifesaving team accomplished the unthinkable today, staging a raid in the heart of the sport and sailing home with the world title.
Australian spectators and officials at Rescue 2012 were left slack-jawed and incredulous.  The hosts' team, packed full of superstar iron men and woman, were left with the unmistakable gritty taste of sand kicked in their faces. 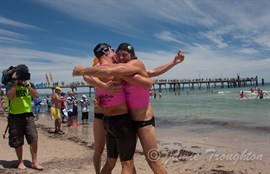 Not since 1998 has a Kiwi team lifted the Alan B Whelpton Trophy.  On that occasion in Auckland, the Aussies famously neglected to bring the trophy with them and had to get it couriered over on the last day.
This time, there was no such hiccup.  The meticulously prepared New Zealand, bolstered by Olympic swimmers Andy McMillan, Steve Kent and Natasha Hind and kayaker Steve Ferguson, opened up a big lead in the two days of pool competition and against all predictions, maintained it over two days on Glenelg Beach. The trophy was as good as theirs when they turned up on the final day and the final gap was yawning, with New Zealand finishing with 844 points to Australia's 765.
Along the way, they unearthed a couple of new stars in 19-year-old Devon Halligan, who smashed a quality field to win the women's ski race today and featured strongly in a heavy program in the water, and gutsy ironman Max Beattie.
New Zealand captain McMillan couldn't suppress his utter jubilation, having battled a knee injury throughout the buildup and having swum himself delirious in the pool.
"The Australians are like big brothers to us and a lot of the team train at Aussie clubs alongside these superstars," McMillan said. "Beating them on their home beach is one thing but we absolutely smashed them and that is an incredible feeling.  We came here with a mission and we achieved it and the whole team is jumping out of their skins.  This feeling will stay with us for the rest of our lives."
Needing a miracle on the final day, 91 points adrift in second place, Australian star Shannon Eckstein thought he'd made a bold statement by claiming the surf race and clean-sweeping the men's board race with Hugh Dougherty.
Kevin Morrison (third) and Beattie (fourth) limited the damage in the board race, however, before Halligan tore up the ski race with a remarkable display.  Her effort was magnified by teammate Nikki Cox, who snuck through for second, leaving Australian ironwomen stars Kristyl Smith and Commonwealth Games swimming gold medalist Rebecca Creedy in their wakes.
"I couldn't have asked for anything better than to turn around on the line and see Nikki come through right behind me," Halligan said.  "It was really tough out there because it was so flat and there was only a little bit of wind chop and I could see them coming in my peripheral vision but managed to hang on."
Minutes later, McMillan and Kent delivered another hefty nail in the Aussie coffin, powering out in the tube rescue, with Morrison and Ferguson assisting in the drag up the beach.  Australia could only finish third behind France.
"Macca gave us a stern speech this morning and everything just fell into place throughout the day," vice captain Morrison said.  "We couldn't seem to put a foot wrong, or when we did, someone was there to lift us back up again. We've just been riding off each others' success.  Every time we'd see the girls win or one of the guys do something awesome, the whole team just lifted again and it was pretty inspiring to be around."
Chanel Hickman added to the lustre with a consummate beach flags win, while Paul Cracroft-Wilson was second in the men's flags.
Beattie underlined his potential by finishing second behind Eckstein in the ironman while Halligan, after a heavy schedule, finished fourth in the ironwoman. The New Zealand women's taplin team finished in style, winning the last event of the championships.
McMillan believes the seeds of their success were sown long before the team reached Adelaide.
"It's been a huge campaign from our support staff, who have planned for this for many months, if not years.  We got the belief in the squad early on that we could pull it off and that has just grown the longer we've been together." 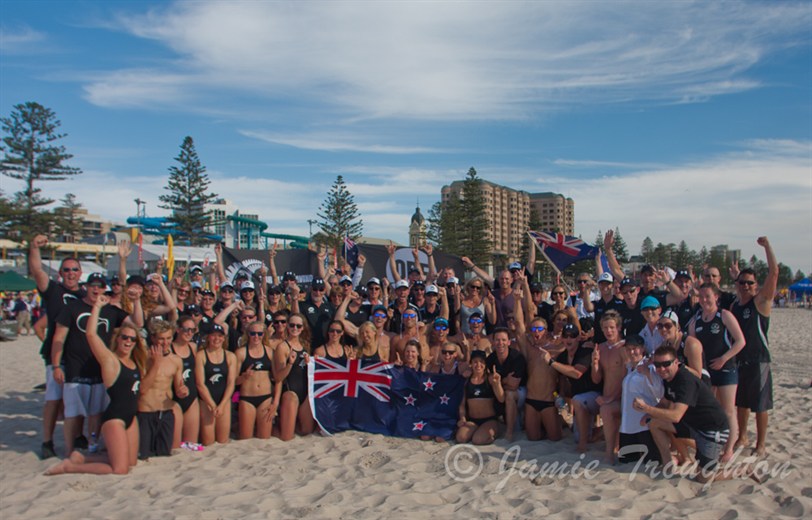