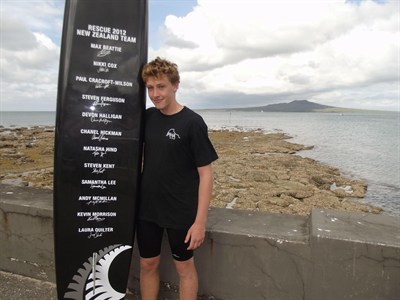 Christmas has come early for Adam Walker, 16, who is the proud new owner of a Sonic paddle board designed and exclusively signed by Rescue 2012 World Champions the Black Fins.

His mum Toni was the top bidder in a Trade Me auction where Sonic NZ generously donated the exceptionally designed paddle board to celebrate the Lifesaving World Championships with the proceeds going directly to Surf Life Saving New Zealand.

The Piha Surf Life Saving Club member says he was on the edge of his seat waiting for the auction to close.

Toni spotted the link to the Trade Me auction on the Surf Life Saving website while checking how the NZ team were getting on at Rescue 2012. "I'd been thinking about getting Adam a board for a while and happened to see the board up for auction. The fact that it was Sonic and the proceeds were going to Surf Life Saving made it a very easy decision," she says.

"We live and breathe Surf Life Saving so it's nice to know that it's supporting them," she says.

Toni was hoping to keep the purchase a secret so she could give the board to Adam for Christmas. But Adam, who was at home studying for an exam, heard Toni's iPad beeping every time the auction auto extended. Adam says as it got closer and closer to the end of the auction, he was nervously watching and waiting. He then rang his mum at work to tell her she'd won a board.

Adam took the board out for the first time on Tuesday and says it's really light and fast.

The fact that it's a limited edition Sonic board is one thing but to have the whole NZ team's signatures on it, including his coach Steven Ferguson, means a lot, he says. "I've always wanted my own knee board and it's great to have such a special one," he says.

SLSNZ announced a one year supporting partnership with Sonic NZ last month. This partnership will see Sonic NZ and SLSNZ working together on a number of aspects of Surf Sports in NZ, in particular the continuation of the highly successful Sonic Series that was launched last season.

Sonic NZ owners Matt and Kylee Sutton are excited at the prospect of working closely with SLSNZ for events on the NZ Sport calendar. "Sonic is fully committed to Surf Sports and lifeguarding in NZ, and being the sole NZ Surf Craft manufacturer, partnering with SLSNZ seems natural for our brand" Matt Sutton says. "We have a genuine passion for surf sports in NZ, and are committed to supporting SLSNZ and all of its clubs around the country."

The winning bid was $1,400 which goes directly to Surf Life Saving NZ.