Three gold medals to Wellington swimmer Samantha Lee has New Zealand in a commanding position after the first full day of competition at the Rescue 2012 world lifesaving championships in Adelaide.
The 20-year-old Lee broke three world records on a magnificent day for the Kiwis, which saw them finish 45 points clear of arch-rivals and defending champions Australia.
New Zealand relied heavily on London Olympic swimmers Natasha Hind, Andy McMillan and Steve Kent, though it was Lee who stole the limelight with wins in the 100m rescue medley, the 200m obstacle race and the 4 x 50m obstacle relay.  She twice broke the world record in the rescue medley, lowering her mark to 1min 11.23secs, although the most satisfying moment came when teaming with Hind, Devon Halligan and Laura Quilter in the relay final.
"I didn't realise until we got our medals just how far in front we were," Lee said, as she digested their 1.50.39 time, 4secs in front of the Netherlands.  "I'm stoked to get the individual world record but there's nothing like breaking a world record as a team.  You just can't ask for anything more."
New Zealand's 207-point total could have been even greater but for a disqualification in the women's 4 x 25m manikin carry, the second-to-last event of the day.
New Zealand will be aiming for a big lead on the final day of pool competition, with Australia's much-vaunted ocean athletes expected to tear into their work during the final two days on Glenelg Beach this weekend.
"When the competition gets to the beach, I'm in charge of sunscreen application and hopefully I would've earned my rest by then!" Lee said.  "I've just got to get through one more day and I'm pretty pumped for it. It will be a pretty early night tonight with another long day tomorrow."
Hind grabbed silver behind Lee in both the 200m obstacles and the rescue medley, while Kent and McMillan came agonisingly close to another magnificent double in the men's 200m obstacles,  both going under Italian Federico Pinotti's 2009 world record of 1.54.97.
However, China's Feng Shi went even better, clocking 1.53.44, while McMillan (1.54.54) and Kent (1.54.63) had to settle for the minor medals.
McMillan, Kent, Max Beattie and Steve Ferguson also picked up bronze in the 4 x 50m obstacles relay, although coach Scott Bartlett was warning his charges not to get ahead of themselves.
"We had a really good day in the pool today but we need to back that up again tomorrow," Bartlett said. "We'll need a big lead over Australia going onto the beach if we're going to give the world title a decent nudge."
The New Zealand under-20 team also had an outstanding day, with Papamoa's Natalie Peat picking up a gold in the 200m obstacles race and adding silver and a bronze, while Chris Dawson (Midway) also grabbed gold in the 200m obstacles.
However, the Australian under-20 team came storming home after a slow start and have built a handy lead going into the second day. 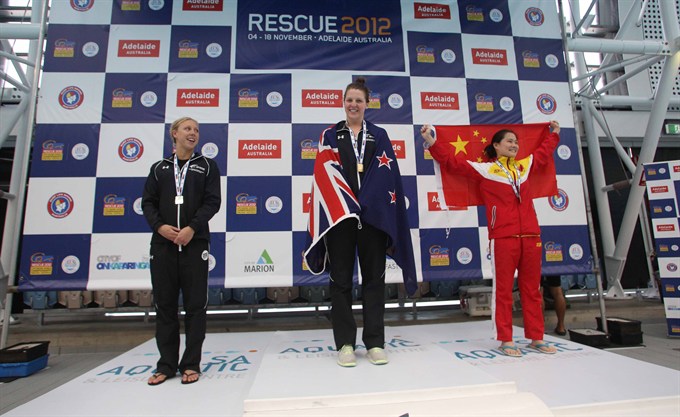