In the end, Wainui's Oliver Puddick and Midway's Mike Janes couldn't be separated after their surf race sprint finish, crossing the line together and awarded first-equal, while Red Beach's Caitlin Ryan took out the women's ski race from Rachael Dodwell (Mairangi Bay and Devon Halligan (Midway).

Everywhere else, however, Halligan was peerless, winning the under-19 and open ironwoman race, the open board race and run-swim-run, the under-19 ski race and the under-19 tube and board rescue.

The Sydney-raised 19-year-old, whose father is former Kiwis rugby league star Daryl, was delighted with her form two weeks out from the Australian championships.

"I pretty much classify myself as a Kiwi so I'm really proud of my results here," Halligan said.  "A lot of people in Australia don't know how good the competition is here on this side of the Tasman - there are so many good athletes coming through and it's really good racing."

Taylor also had a stellar carnival, grabbing the under-19 ironman, surf race, ski race and tube rescue titles on the final day and picking up silver in the under-19 board race..  Despite the heavy schedule, he still had enough energy for one last sprint in the final leg of the open men's taplin, heading off Mairangi Bay's Mike Lee to hand Midway the crown.

It also gathered the crucial points for Midway to reclaim the Allan Gardner Trophy, over-taking defending champions Mount Maunganui.  Midway's final tally was 102.5, with Mount second on 98 and fellow Bay of Plenty club Papamoa third on 89.

Beattie's ironman victory followed an impressive first-day run-swim-run victory and a third in the board race, with the 20-year-old Gold Coast-based Kiwi unable to suppress his excitement.

"This is why you get up at 4.30 every morning and why you do those extra gym sessions," Beattie said.  "You do the extra one percent just to get this exact feeling - it's really indescribable."

Beattie paid tribute to Taylor, who beat him in a similar sprint at last month's Lion Foundation Surf League in Mount Maunganui.

"He usually gets me in the sprint so this is a welcome change.  He's been backing up all day, race after race, so for him to get second in the open ironman is a real credit to him."

Glenn Anderson (New Plymouth Old Boys) finished behind Janes and Puddick in his specialist surf race, though still picked up yet another national title, with Mitchell Owen in the tube rescue.

The open men's division went entirely to form, however, with the Piha A crew successfully defending both the long-course and short-course titles.  The club's dominance showed with their second crew, the Piha Boomers, picking up a silver and a bronze in the two finals.

Waimairi emulated that effort by winning both open men canoe finals, while St Clair and Wainui shared wins in the open women's division, with the Papamoa masters crew finishing second both times. 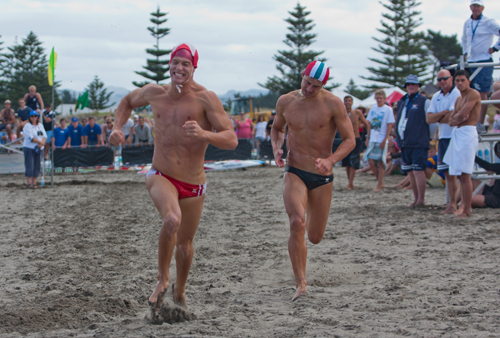